Gamma-Ray Burst is the (Latest) Most Distant Object Ever Seen 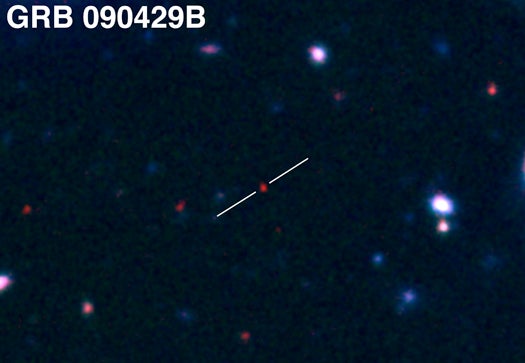 And just like that, we’ve got a new candidate for the most distant object in the universe. It was only in January that Hubble data showed that the space telescope had glimpsed a galaxy so distant that it appeared as it did when the universe was only a few hundred million years old. Now a gamma-ray burst first spotted by NASA’s Swift satellite in April of 2009 could potentially replace it as the most distant object ever seen.

GRB 090429B (the numbered name denotes its April 29, 2009, discovery) is estimated to be some 13.14 billion light years away from Earth. Given that the universe is only estimated to be about 13.7 billion years old, that makes the source of this light really young in a cosmic sense, originating when the universe was just 4 percent of its current age and 10 percent of its present size. It’s also way, way out there, further than any confirmed quasar or galaxy on the books.

Apart from the potential distance record, that makes GRB 090429B extremely interesting from a cosmological standpoint. Whatever galaxy spawned this intense burst of gamma-rays would have to be one of the first galaxies in the universe. And though we can’t see that galaxy with our current observatories, future researchers will know exactly where to point their next-gen telescopes to get a glimpse this GRB’s progenitor.

In the meantime, additional analysis will have to be done to determine if GRB 090429B is indeed the most distant object ever seen in space. Pinpoint accuracy at such distances is understandably hard to come by, but multiple lines of evidence endorse this latest GRB as the current record-holder.