Copenhagen Suborbitals, the not-for-profit Danish aerospace organization that is trying to build the first amateur-built rocket for human space travel,... 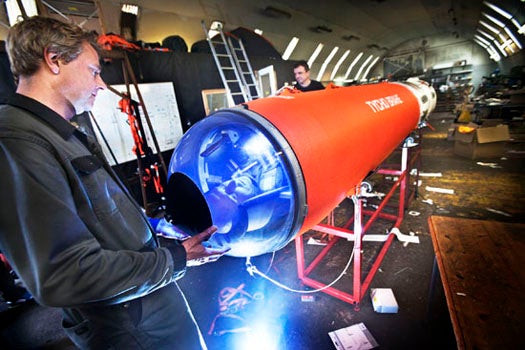 Copenhagen Suborbitals, the not-for-profit Danish aerospace organization that is trying to build the first amateur-built rocket for human space travel, is preparing to give its launch vehicle another go. After a scrubbed launch late last year in which the rocket motor wouldn’t fire up, the group has set a launch window of June 1-5, with a target launch time set for June 2.

A quick backgrounder: Copenhagen Suborbitals is a donation-funded, open-source effort to launch tourists into space via a homegrown, volunteer-built space rocket. And it has come a long way. Helmed by Kristian von Bengtson and Peter Madsen, the team has developed a launch vehicle and crew capsule for one (known as the Tycho Brahe), undertaken more than 30 static engine tests, and raised all the money from donors and sponsors to keep the launch attempts coming.

If this one is successful, Madsen may soon make the first attempt to ride the rocket, known as the HEAT 1-X, from a steel catamaran parked in the Baltic Sea to an altitude beyond the 62.5 miles that roughly constitutes the boundary of space before riding the zero-g parabola back down into the atmosphere and parachuting to safety, much as Al Shepard’s first Mercury mission did.

No hard launch time has been announced, but a handful of danish sites will be providing live coverage. Links can be found here.