Video: SDO Captures a Sunspot Cluster Swimming Around On The Sun’s Surface

Sunspots aren’t static, and NASA has the amazing video footage to prove it. Captured in February, this clip taken by... 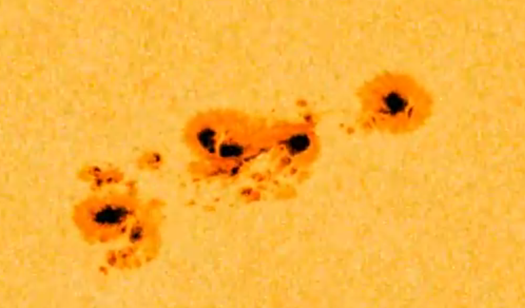 Sunspots aren’t static, and NASA has the amazing video footage to prove it. Captured in February, this clip taken by NASA’s Solar Dynamics Observatory shows how sunspots surface, change, and grow over time as the forces of both convection and the Sun’s powerful magnetic field act upon them.

The time elapsed is about two weeks, or a half rotation of the Sun. The sunspots begin to emerge on the surface about 20 seconds into the video, at which point things start to get interesting. A total of five sunspots emerge, and if this seems anti-climactic to you just consider that each of them easily dwarfs Earth and explodes from the surface with the energy equivalent of millions of nuclear warheads.

That’s a big blast (or in this case, a few big blasts). Fortunately, the massive gulf of space between Earth and the Sun and our own atmosphere go a long way toward protecting us from such solar explosions, but don’t think that the repercussions of these particular spots wasn’t felt on Earth. Remember that massive solar flare that threatened satellite communications and electrical grids here on Earth back in February? You’re looking at the origin right here.