A mystery is unfolding out there in the cosmos, and NASA’s Swift, Hubble Space Telescope, and Chandra X-Ray Observatory are... 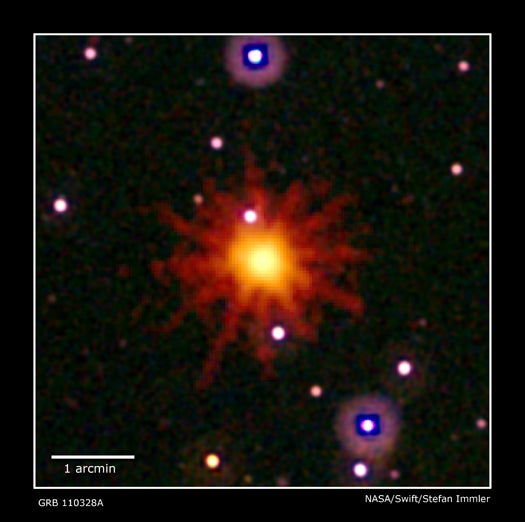 A mystery is unfolding out there in the cosmos, and NASA’s Swift, Hubble Space Telescope, and Chandra X-Ray Observatory are teaming up to solve the case. But while researchers have pieced together some of the pieces of the puzzle over the last week, the huge, high-energy blast continues to brighten and fade, making it the brightest, longest-lasting such burst of energy researchers have ever seen.

It all started when Swift’s Burst Alert Telescope picked up a powerful gamma-ray burst on March 28, at which point it notified scientists the world over. Astronomers sometimes see gamma-ray bursts like this when a star dies, but these bursts generally last a few hours or less.

The plot thickened when the burst didn’t fade away. Dozens of telescopes turned toward the enigma, and it was concluded that the source of the gamma-ray burst is at the center of a galaxy some 3.8 billion light-years away. The burst was still repeating itself, brightening and fading over and over. There are objects in our own galaxy known to produce such repetitive bursts, but at a fraction of the intensity.

However, the gamma-ray burst’s location at the center of a galaxy does point toward one likely suspect: a black hole.

So astronomers now have a theory. It’s quite possible that a star was minding its own business when it wandered too close to the galaxy’s central black hole. The intense forces generated by the black hole began to tear the star apart, causing infalling gas to begin streaming into it in a particle jet. This spawned an outflowing jet along the black hole’s rotational axis, and that jet is pointed directly at us from billions of light years away.

A particle jet streaming directly at us from a black hole would explain the uptick in brightness over time, and the high-dose of X-rays could be explained by the matter that would be moving near the speed of light as it streams from the star toward the black hole. But the case is not yet closed on this one; additional Hubble observations are planned to see if the brightness streaming from the galaxy’s core changes. If it doesn’t eventually recede, or if it becomes inexplicably far more intense, there could be additional wrinkles to this mystery that have yet to be accounted for.