Kick In to Build This Ultra-Light Titanium Ribbon Bike Lock 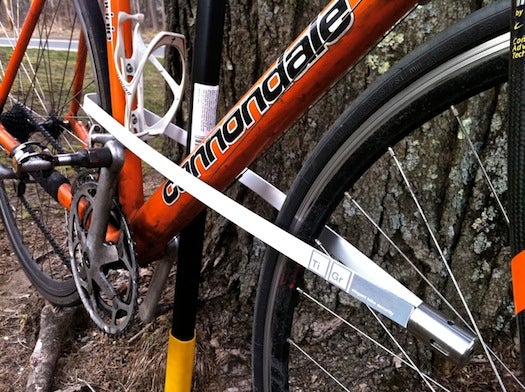 Bikes are beautiful, elegant machines, which explains why they’re often the target of theft. You have to protect your bike, but doing so usually means hauling around a lock that’s basically an intimidatingly giant piece of steel in various shapes. The TiGr, currently a prototype on Kickstarter, is just as sleek and pretty as a well-made bike–and hopefully does its job as well.

Created by John Loughlin and tested by Joshua A.C. Newman (of no apparent relation to power pop god A.C. Newman), the TiGr is a long, flexible titanium bow with a steel lock, either 0.75 inches or 1.25 inches wide and long enough to lock both your wheels to a stationary object. You wrap it around the top tube of the bike to store it, where it balances properly and doesn’t take up any extra room. It weighs, according to its creators, about a third the weight of a typical U-lock, but is just as effective. Apparently the lock is flexible enough to wrap around objects as big as 5.5-inches in diameter–plenty big enough for bike racks, fences, street signs, and parking meters, though not as flexible as a chain. Of course, a chain also weighs a ton and must be draped around your waist, which is aesthetically questionable.

The actual security bonafides are a major reason to fund the TiGr on Kickstarter–the creators say it holds up to a 48-inch bolt cutter attack as well as a saw, but admit that these are their own tests. Part of the Kickstarter money would be used to get the lock properly accredited. They’ve already got $13,000 worth of pledges towards their $37,500 goal–hopefully they can get there and we can try out a very pretty-looking lock before winter comes.