The cosmic fireworks above capture both stellar birth and stellar death in one sweeping view. With eyes pointed at nebula... 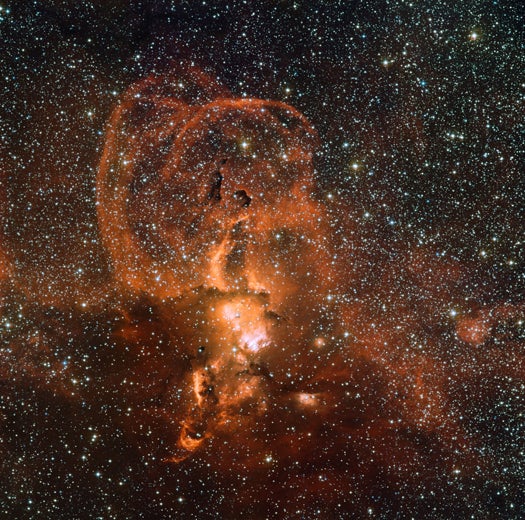 The cosmic fireworks above capture both stellar birth and stellar death in one sweeping view. With eyes pointed at nebula NGC 3582, part of a larger star factory here in the Milky Way, the Wide Field Imager at ESO’s La Silla Observatory in Chile managed to capture a nebula shaped by supernova glowing with the intense light of baby stars.

Some of the stars that form in the region are huge, far more massive than the one anchoring our solar system. These stars have shorter lifespans during which they dump huge amounts of energy into their surroundings. Then, like any good massive star, they collapse in on themselves in explosive supernovae.

Those supernovae create the corona effect you see above in the wispy loops of gas. At least, that’s what astronomers think causes the bubble-like features around the fringes. The hot spots are definitely lit by stars fresh out of the nursery, but the important thing to know about this image is that you can get a wallpaper-res version here.