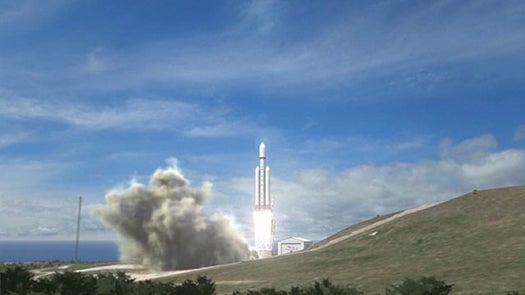 Private spaceflight concern SpaceX has been teasing the public for more than a week with rumblings of a big announcement today. Indeed, that announcement is big: about 22 stories big. SpaceX founder Elon Musk today unveiled the company’s next big thing, the Falcon Heavy rocket, a massive launch vehicle with a cargo capacity of 117,000 pounds.

SpaceX already has a deal inked with NASA to become the first private space agency to resupply the International Space Station using its smaller Falcon 9 rocket and Dragon capsule.The 27-engine Falcon Heavy, however, is aimed at hurling large government and commercial payloads into Earth orbit, and to do it on the (relatively) cheap.

By large payloads, we mean very large. The 227-foot Falcon Heavy booster is currently under construction at SpaceX’s California HQ, and when complete it will dwarf anything rivals can throw at it. The closest U.S. analog from NASA’s heavy-lift heyday would be the Saturn V, the rocket that carried the Apollo program to the moon. The closest thing the private sector can offer by way of comparison is United Launch Alliance’s Delta IV, a 50,000-pound capacity booster which currently launches the Pentagon’s heavy payloads for up to $275 million per launch.

The Falcon Heavy, SpaceX says, offers a clear-cut cost advantage. For just $80-125 million, customers can get more than twice the payload into orbit aboard a Falcon Heavy. That, according to Musk, is a new world record for cost per pound to orbit.

Of course, it’s easier to name a competitive price point before your rocket is completed than afterward when all the costs are tallied. Still, with a capacity like the Falcon Heavy’s SpaceX should have no problem selling cargo space assuming costs don’t spiral wildly out of control. That’s exciting, not only because it bodes well for the private space industry and for companies looking for a lower cost of entry into Earth orbit, but because for the first time in a long time we’re going to see something as awesomely powerful as the mighty Saturn V take to the launchpad.

When will that be? SpaceX aims to launch their new heavy-lifter in a demo flight from California’s Vandenberg AFB by end of next year.