The remote control for these fun devices isn't under the couch 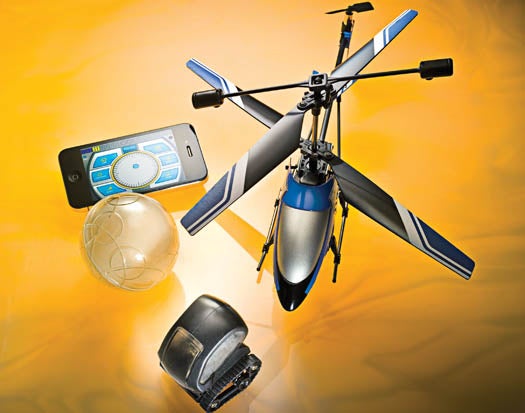 The toy department just got its game on with technology that transforms your smartphone into a remote control. This switch means you’ll be able to guide helicopters into smoother swoops and swirls and to play augmented-reality games with friends.

Some 45 million Americans have a ready-made, near-universal remote control in their pockets. We already use smartphones to turn up home stereos, scroll through iTunes playlists, and pause Apple TVs. The devices’ built-in radios, such as Wi-Fi and Bluetooth, can also control toys.

Smartphone touchscreens and motion-sensing accelerometers provide greater motion control than their button and joystick controller counterparts. You’ll also be less likely to lose the remote and won’t need to scrounge around for new batteries.

Taking Flight: The WiFli Helicopter makes flying easy. The controller app has directional commands and a virtual throttle, letting it take off with a finger swipe. In a crash, its hinged propellers fold instead of breaking.

Seeing Infared: Tankbots operate on four frequencies so that four people—and their ‘bots­—can play together. Each Rubik’s Cube–size tank comes with a dongle that attaches to a smartphone, turning the handset into an infrared remote. In autopilot mode, the toy uses infrared sensors to avoid obstacles.

Having a Ball: About the size of a baseball, Sphero rolls according to the tilt of your phone, using its own internal gyroscope for propulsion. Because Sphero reports its location back to its connected phone over Bluetooth, it can engage in multiplayer games. In an augmented-reality game called Sumo, for example, two players try to knock each other out of a ring shown on the phones. Sphero’s open-source platform lets anyone design apps.