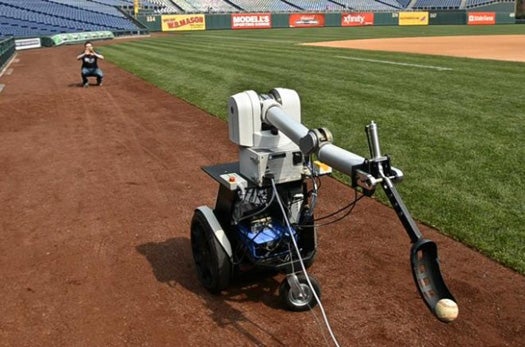 At this afternoon’s Phillies-Brewers game at Citizens Bank Park in Philadelphia, 2008 Cy Young award winner Cliff Lee will take the mound for the home team. One would think Lee’s job is secure, but even a renowned fastballer may have reason to sweat his position in the rotation after today’s game-opening festivities, when a robot fashioned by the University of Pennsylvania will toss the game’s opening pitch. Insert your own “pitching mechanics” joke here.

The robot, assembled over the last six weeks by Penn robotics engineers, is throwing the ceremonial pitch as part of Science Day festivities. It is essentially patched together from a Segway, a third support wheel in the rear, and a three-jointed throwing arm on top. A pneumatic cylinder driven by compressed CO2 delivers the pitching power, and an onboard computer controls velocity and trajectory.

When you think about it, that all adds up to a pretty desirable arm for your pitching corps. As long as you don’t run short of compressed air, pitchbot can go the distance, pitching consistently and accurately straight through the late innings en route to a complete game. Unfortunately, its velocity tops out at about 40 miles an hour, but that’s by design–the league didn’t want the robot out there hurling 100-plus mile per hour projectiles.

Of course, given all the hype surrounding the Phillies starting rotation this year, too much has been invested to replace Lee, Roy Halladay, or any of the others on staff there. Members of that mediocre Phillies bullpen, however, might want to take notes.