New Method Punches Holes in Hair to Create a Forensic Record Of What You Ingested, Hour By Hour

You are whatever your hair says you are, and that’s not a statement about style. Your hair stores within it... 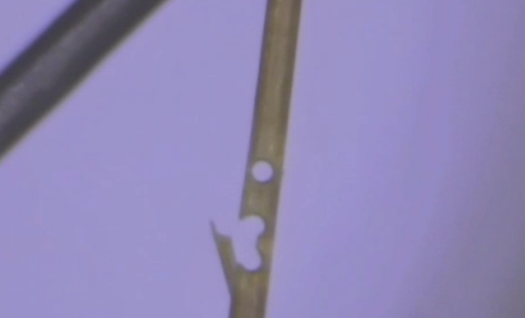 You are whatever your hair says you are, and that’s not a statement about style. Your hair stores within it a chemical record of what you’ve been eating (and you are, as we all know, what you eat). A new laser-based method of chemical analysis can produce an hour-by-hour record of what you’ve been eating from a single strand of hair, making your ‘do into a detailed forensic record.

There are existing methods of testing hair samples for carbon clues, but they tend to destroy small samples within the hair and they certainly don’t give time-based measurements. That is, they can distinguish what’s in your diet, but have trouble creating a chronology of when you ate what, much less an accurate hour-by-hour record.

The new method, developed at Pacific Northwest National Laboratory, uses an ultraviolet laser that is careful to break up materials in the hair rather than scorch them as other lasers typically do. Once broken apart, the particles can be fed into a mass spectrometer for analysis.

From that analysis of carbon isotopes, researchers can reconstruct a forensic record of the person to whom the sample belonged. Specifically, they can see what and when you’ve been eating (and from that perhaps deduce where you’ve been eating as well).

But while carbon betrays what a person has been eating, other elements could paint an even more detailed portrait of his or her life. Oxygen isotopes are tied to the water cycle and sulfur to bedrock, while nitrogen could help further specify exactly what a person has been consuming. As such, the PNNL team is now adapting their laser technique to analyze those isotopes as well.

See some small-scale laser ablation below.