We’ve seen plenty of concepts designed to lessen the physical burden of being a member of the military — Marines... 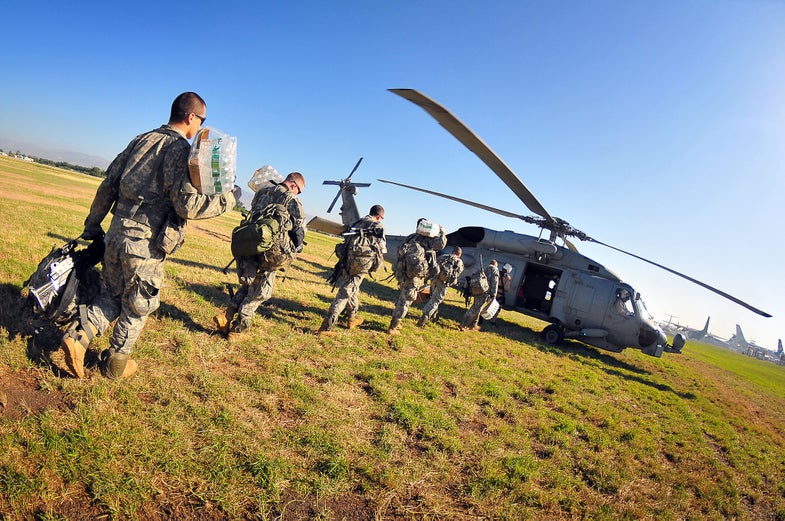 We’ve seen plenty of concepts designed to lessen the physical burden of being a member of the military — Marines using portable renewable power stations, clothing that charges radios and GPS devices. But there’s not much being done to address drinking water, one of the heaviest yet most critical battlefield necessities. Now the Oak Ridge National Laboratory might have a solution that can help lessen the weight of water.

A new condensation process captures water from burning diesel fuel, and is so efficient that it could theoretically produce a gallon of water from a gallon of diesel, using lightweight materials. As an added bonus, the process removes contaminants, so about 65 to 85 percent of that water could be recovered for drinking water or other uses.

The system could also be used for other applications, such as capturing vapor from power plant exhaust or even adding weight to a new generation of dirigibles to help them land, the Register reports.

The trick is a new inorganic membrane that uses capillary action to condense the water from the diesel’s exhaust. The diesel exhaust runs through a series of ceramic tubes, which contain microscopic pores. The pores suck up the water vapor, which passes through to the other side. MSNBC explains the process in more detail.

Deriving water from condensation is not a new idea, of course, and neither is the notion of getting water from spent fuel. The military already rejected it because it required cooling the exhaust so that the water would condense, making it bulky and heavy. But this system captures water molecules even in their vapor phase, requiring no additional energy input.

Military personnel need about seven gallons of water a day for drinking and other purposes, which requires hauling water to remote outposts and thereby exposing service members to IEDs or other dangers. Capturing water from fuel — especially at such high efficiency rates — would serve as a two-for-one deal, reducing the number of trips.