Teams of viruses can help build better solar panels by ensuring nanoscale components behave properly, according to a new study.... 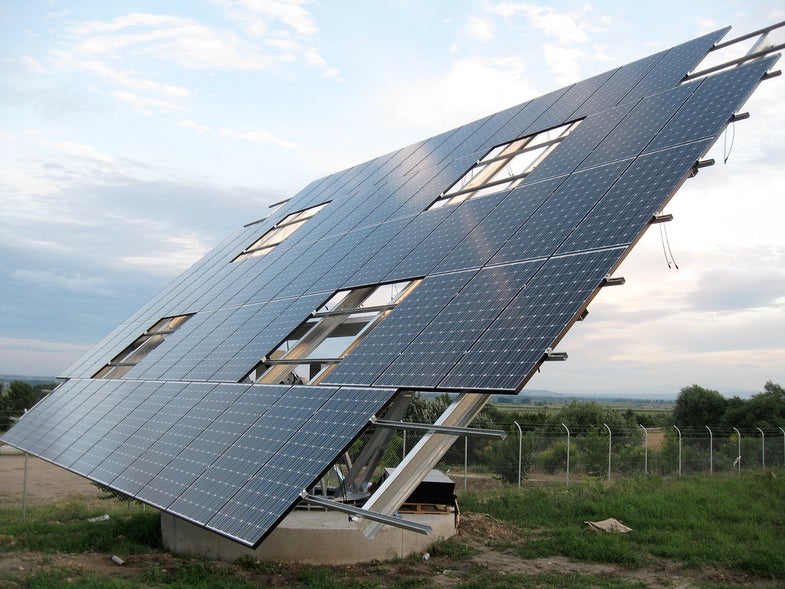 Scientists already knew that carbon nanotubes, rolled-up sheets of graphene, could improve the efficiency of photovoltaic cells. Ideally, the nanotubes would gather more electrons that are kicked up from the surface of a PV cell, allowing a greater number of electrons to be used to produce a current.

But there are complications — carbon nanotubes come in two varieties, functioning either as semiconductors or wires, and they each behave differently. They also tend to clump together, which makes them less effective at gathering up their own electrons. MIT researchers found that a certain bacteria-attacking virus called M13 can be used to make things go more smoothly.

M13 has peptides that bind to the carbon nanotubes, keeping them in place, MIT News explains. Each virus can grip about five to 10 nanotubes each, using roughly 300 of the protein molecules. The viruses were also genetically engineered to produce a layer of titanium dioxide, which happens to be the key ingredient in Grätzel cells, a.k.a. dye-sensitized solar cells. (These cells use TiO2 instead of silicon, and their inventor, Michael Grätzel of the École Polytechnique Fédérale de Lausanne, won the Millenium Technology Prize for them last year.) This close contact between TiO2 nanoparticles helps transport the electrons more efficiently.

The viruses also make the nanotubes water-soluble, which could make them easier to incorporate into PV cells at room temperature, lowering manufacturing costs.

Graduate students Xiangnan Dang and Hyunjung Yi, MIT professor Angela Belcher and colleagues tested this method with Grätzel cells, but they say the technique could be used to build other virus-augmented solar cells, including quantum-dot and organic solar cells.

They also learned that the two flavors of nanotubes have different effects on solar cell efficiency — something that had not been demonstrated before. Semiconducting nanotubes can enhance solar cells’ performance, but the continuously conducting wires had the opposite effect. This knowledge could be useful for designing more efficient nanoscale batteries, piezoelectrics or other power-related materials.

The virus-built structures enhanced the solar cells’ power conversion efficiency to 10.6 percent from 8 percent, according to MIT News. That’s about a one-third improvement, using a viral system that makes up just 0.1 percent of the cells’ weight.

“A little biology goes a long way,” Belcher said in an MIT News article. The researchers think with further research, they can improve the efficiency even more.