Google got us good on Friday with their “Gmail Motion” April Fool’s joke, in which awkward businessmen perform calisthenics in... 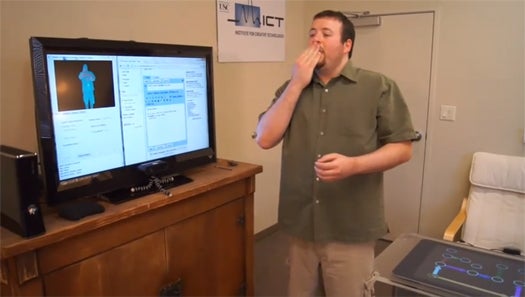 Google got us good on Friday with their “Gmail Motion” April Fool’s joke, in which awkward businessmen perform calisthenics in front of a Kinect-esque motion sensor to reply to emails. While most of us just laughed, some hackers decided to make Gmail Motion a reality.

A group of developers at the University of Southern California Institute for Creative Technologies hacked the Kinect (what else?) using software they already had from other projects and built a fully-functional Gmail Motion, which they call the Software Library Optimizing Obligatory Waving (SLOOW). “No offense to the geniuses at Google, but we weren’t able to get their application running on our computers,” one hacker says in the video. He then goes on to demonstrate that the silly motions Google came up with – licking a stamp and sticking it to your leg to send a message, for instance – really work in this program.