Bludgeoning bacteria instead of drugging it 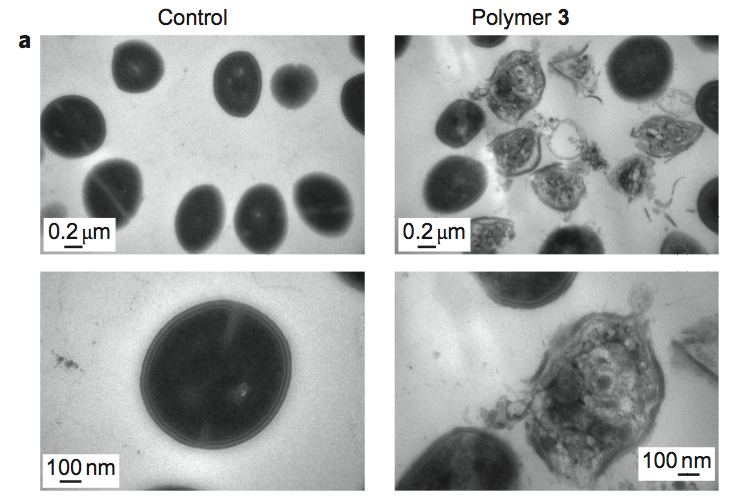 A new breed of biodegradable nanoparticles can glom on to drug-resistant bacteria, breaching their cell walls and leaking out their contents, selectively killing them. The polymer particles could someday be used in anything from injectable treatments for drug-resistant bacteria, to new antibacterial soaps and deodorants, according to inventors at IBM. After their work is done, the particles break apart, flushing away with the invaders they destroyed.

The nanoparticles, which IBM says are relatively inexpensive, were effective against bugs that have been evolving to resist antibiotics, including methicillin-resistant Staphylococcus aureus (MRSA). Preliminary results suggest the particles could also be effective against yeast, fungus and small bacteria like E. coli, IBM says. Research on the new particles is reported in this week’s issue of the journal Nature Chemistry.

Antibiotics kill microorganisms in various ways, including interfering with their DNA or interacting with their ability to rebuild their cell walls, explains James Hedrick, advanced organic materials scientist and master inventor at IBM Almaden Research Center in San Jose, Calif. But some of the bugs survive the onslaught, leading to new generations of bacteria that won’t succumb to the drugs.

“These are designed to slice the cell membrane, to rip the membrane up and eliminate the contents,” Hedrick said. “It’s kind of like the way a virus would work — a virus drills a pore, empties the contents and hijacks it. This is drilling in little holes, and all the contents leak out.”

Transmission electron micrographs show it works: As the images show, the cell walls have been ruptured and everything inside is gone. The best part is that bacteria cannot evolve resistance because it’s a physical attack, not a chemical one.

On the left, a healthy Enterococcus faecalis bacteria cell; on the right, a destroyed cell, with a ruptured wall and leaky contents clearly visible. Enterobacteria like this one — and like salmonella and e. coli — are found in the intestinal tract.

These particles are special because they self-assemble in water and are biodegradable, unlike other nanoparticle treatments. They’re made of amphiphilic polycarbonate material, meaning some of the particles are water-loving and some are water-phobic. When exposed to fluids — like serum or blood — the polycarbonate self-assembles into clumps about 200 nanometers in size. Another part of the clump is positively charged, designed to match the negatively charged surface of microbes, Hedrick said.

Cell walls are dynamic barriers, constantly morphing and changing as they divide. When something binds to their surface, the walls’ synthesis is interrupted. Penicillin, for instance, binds to an enzyme that helps build the walls. Hedrick and collaborators at the Institute of Bioengineering and Nanotechnology in Singapore say the charged particles interact with the cell walls to destabilize them.

“These particles are cationic (positively charged), so they are attracted to the microbial membrane surface, and it begins to disrupt that dynamic assembly process of the membrane,” Hedrick said.

The authors also report that the particles can be used at relatively low concentrations. Hedrick said they’re not sure what makes the particles so effective, but it’s probably because they can each kill multiple cells, moving on to new targets after the membranes are so disfigured that static no longer binds the cells and nanoparticles together.

“A little of the polymer goes a long way,” Hedrick said.

After a few days of this, enzymes start breaking apart the chains that hold the particles together, said Bob Allen, senior manager at IBM-Almaden’s Advanced Materials Chemistry department.

“Think of the enzyme as a pair of scissors — it will go through and snip it. It’s just a weak link that allows you to have a degradable system,” he said.

The particles degrade to molecules of alcohol and carbon dioxide, which are removed just like anything else in the bloodstream.

IBM believes the particles could be a new way to treat drug-resistant bacteria, especially MRSA, which is frequently associated with hospital infections. The company says antibiotic-resistant bacteria is a fertile field for its polymer research labs — chemists do focus primarily on electronics, but chip-scale research translates well to research in health care, water purification, and energy, Allen said.

Hedrick and Allen cautioned that they’re not clinicians and they don’t know how the particles would be used. But they were optimistic about the possibilities.

“The applications are going to be very diverse, whether we’re talking about wound healing or dressing, skin infection, and quite possibly injections into the bloodstream,” Hedrick said. “But this is way early in the discovery process to be going there.”