Cornell’s Thumbnail-Sized Satellites Are Headed to Space, Could Soon be Bound for Saturn

Cornell researchers are sending a tiny bundle to the International Space Station aboard the space shuttle Endeavour’s final mission, and... 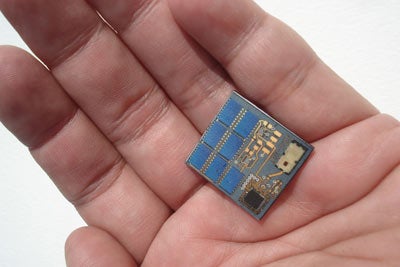 Cornell researchers are sending a tiny bundle to the International Space Station aboard the space shuttle Endeavour’s final mission, and if all goes well their fingernail-sized satellites could be coasting through Saturn’s atmosphere within a decade.

The one-inch-square “chip sats” have been in development for three years at Cornell, and they are small and light enough to behave like space dust, meaning they could sail on solar winds deep into space with no onboard fuel supply. Their size is limiting however, and the Cornell team wants to see just how small they can go while still maintaining communication with Earth.

Their payload aboard Endeavour contains just three chip sats (named “Sprite”) that will be mounted on the exterior of the ISS to see how they stand up to the conditions in space. In a few years they will return to Earth along with other experiments, and the researchers will assess their condition.

Each of the chips will also transmit back to Earth. They all transmit on the same frequency, but their signals are different enough that the researchers can distinguish between them. That’s a key part of the test. Any future deployment of the chip sats would call for far more than three.

The idea is to develop a technology that can be sent deep into space in swarms, with each individual chip beaming back its own stream of information. For example, such arrays could be sent sailing through Saturn’s atmosphere, beaming back diverse data on radiation, chemistry, and particle impacts.