Ask a Geek: What Electronic Gear Will Become Obsolete Next?

A whole new generation of technology is evolving 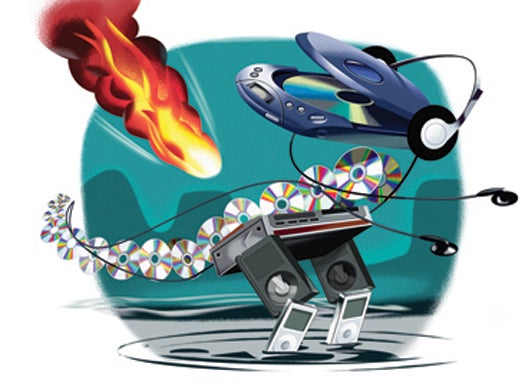 Plenty of once-amazing technologies like the Sony Walkman and Betamax now belong in a museum, and every year the pace of obsolescence gets faster–something not everyone is happy about. Analysts predict that video, music and cellphones are the next categories likely to see familiar equipment die off in the years ahead.

U.S. sales of component DVD players peaked in 2005, and then DVRs and streaming Internet video began to take over. And although Blu-ray player sales are increasing, they will probably never become as dominant as DVD once was, because of on-demand high-def video. Market-research firm In-Stat now projects double-digit declines in annual retail sales of all video discs through 2014.

MP3 players are on the way out as well. Smartphones rival their music-playback abilities, run apps such as Pandora and Slacker, and let users buy music directly from iTunes and Amazon. Besides, most people would rather carry only one gadget in their pocket instead of two. Apple sold 3.7 million fewer iPods in 2010 than it did in 2009. And don’t look for new players from Rio, Dell or Microsoft–the companies have all abandoned the business entirely.

Smartphones are also contributing to the death of “feature” phones–cellphones that, generally, can’t run apps. Feature phones are becoming less of a bargain as wireless carriers begin to require data plans for them and continue to cut smartphone prices. The Nielsen Company projects that smartphone sales will surpass sales of feature phones in the U.S. by year’s end.