In a recent test of autonomous in-flight refueling, two unmanned aircraft flew within 40 feet of each other at an... 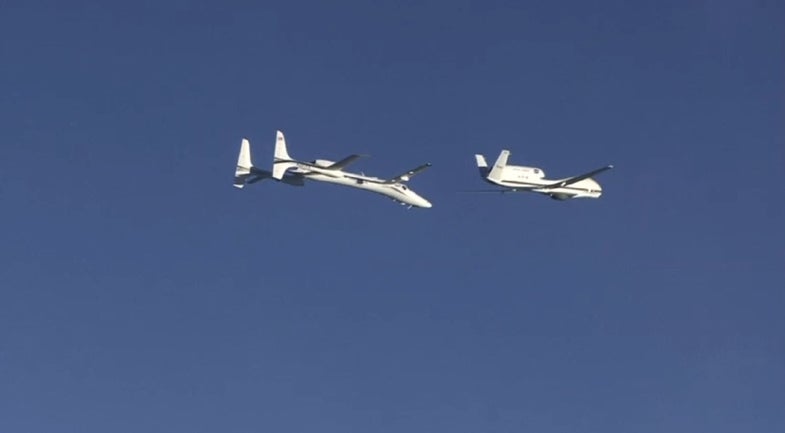 In a recent test of autonomous in-flight refueling, two unmanned aircraft flew within 40 feet of each other at an altitude of 45,000 feet, an aviation record. A Northrop Grumman Proteus test aircraft crept up on a NASA Global Hawk, testing wake turbulence and engine performance in the stratosphere. The test is a step toward teams of drones flying in formation, for refueling or other purposes.

Autonomous aircraft offer plenty of benefits — they can fly long distances at high altitudes, they can take off and land by themselves, etc. — but they’re still not self-sufficient, requiring pit stops to refuel. This will change next year, when Northrop Grumman attempts to refuel two Global Hawk drones in flight, allowing for a week-long journey.

It’s part of a $33 million DARPA program called KQ-X, which seeks to prove autonomous refueling. A previous test used an F-18 as a surrogate unmanned aircraft to autonomously refuel from a 707 tanker. Next time, both planes will be drones.

With or without pilots, flying two high-altitude aircraft in close formation is a notable feat — engines perform differently at 45,000 feet than at lower altitudes. But when both airplanes are drones, it’s even more impressive.

There are plenty of reasons to fly a drone for a week at a time. Last fall, NASA used a Global Hawk to study hurricane formation, because the drones’ 30-hour flight time offers a long window to collect data as hurricanes evolve. A whole week would be that much better. Long-term surveillance is obviously another application.

Watch the airplanes’ dance in this video.