A new, truly 360-degree 3-D display has been developed by researchers at Osaka University. The fog display is created by... 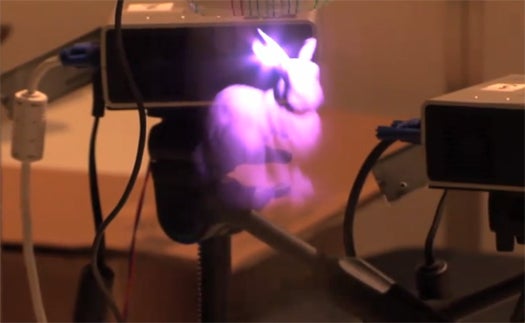 A new, truly 360-degree 3-D display has been developed by researchers at Osaka University. The fog display is created by three projectors each beaming a different image into a column of thin fog, making the resulting image appear 3-dimensional from all angles. This technique means that viewers can physically walk around the display to see it from different vantage points without losing the 3-D effect.

As we see in the video, the image quality is still a little shaky, but researchers say their next step is to make the technology “more stable.” Applications for the 360-Degree Observable Fog Display are not exactly clear, but researcher Asuka Yagi says in the video that they hope to apply it in “healthcare and entertainment.” The project was inspired by amusement park fog displays, so we can only hope that means one day your children will be taking pictures with 3-D fog princesses at theme parks.