It seems we’re saying goodbye to a lot of spacecraft these days. The shuttle Discovery, of course, completed its final... 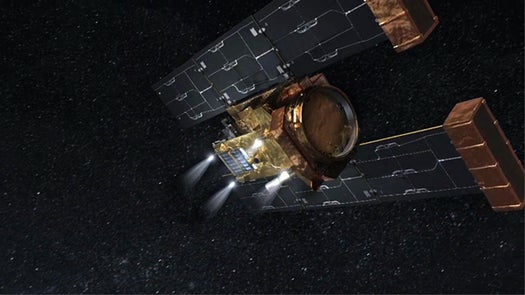 It seems we’re saying goodbye to a lot of spacecraft these days. The shuttle Discovery, of course, completed its final mission earlier this month. And then WISE, after completing it’s roughly one-year survey of the sky, snapped its final image last month. Now, NASA bids farewell to its Stardust spacecraft which, after more than a decade of service, has tailed its last comet.

At around 7 p.m. EST tonight, Stardust’s mission handlers plan to execute a final burn of the spacecraft’s thrusters, firing rocket motors that collectively have fired more than 2 million times since its launch in 1999. And when this burn is complete, Stardust–now completely out of fuel–will lose attitude control, turn its solar panels from the sun, and slip quietly into the great beyond.

But what eulogy would be complete without a quick spin through the highlight reel? Stardust is NASA’s most traveled comet chaser, logging billions of miles. Hurled into deep space in February, 1999, it passed an asteroid (known as Annefrank), rendezvoused with comet Wild 2, and returned particles from Wild 2 to Earth via a separate capsule in 2006 (notching 2.88 billion miles on the round trip).

Still powering through space just fine, NASA sent Stardust out again, this time to comet Tempel 1 which it reached just last month (and sent us back a bunch of beautiful pics). But at this point, with another 646 million miles tallied, Stardust has to be getting low on fuel.

But just how low on fuel is it? Stardust’s mission handlers have an estimate, but there’s really no way to know–there does not yet exist a precise fuel gauge that works well on spacecraft like Stardust. So Stardust will literally be providing science right up to the very end. Handlers at NASA’s Jet Propulsion Laboratory will execute a “burn to depletion,” firing Stardust’s thrusters until its fuel is no more. Stardust will be downlinking information on the burn throughout, allowing scientists on the ground to figure out exactly how much fuel was left in the tanks. By comparing that to their estimates, they can better gauge the efficacy of their fuel consumption models.

It’s a fitting end for a spacecraft that executed no less than 40 major flight path maneuvers over the course of its deep space travels. Stardust’s final act will better inform the construction of and planning for future deep space missions like its own.