One of the ten largest earthquakes ever recorded in the world 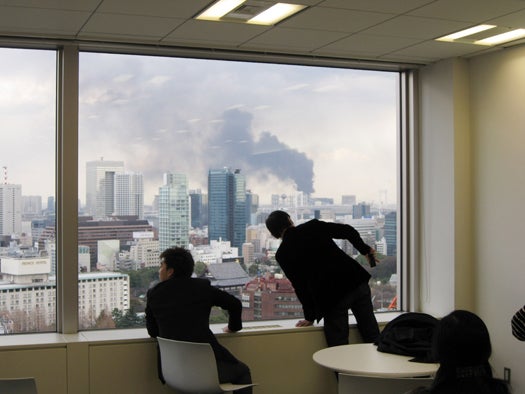 TOKYO, JAPAN - MARCH 11: People look at the smoke rising over the skyline after the earthquake on March 11, 2011 in Tokyo, Japan. A magnitude 8.9 strong earthquake hit the northeast coast of Japan causing Tsunami alerts throughout countries bordering the Pacific Ocean. (Photo by XINHUA/Gamma-Rapho via Getty Images). XINHUA
SHARE

As Japan reels from a magnitude 8.9 earthquake that struck Friday afternoon, technology is helping survivors connect with loved ones and keeping the rest of the world informed. Google launched a version of its Person Finder service so people can search for loved ones or post an update letting others know they’re safe. And others are posting crisis platforms and interactive maps with up-to-date warnings.

Google’s Person Finder, also used in the recent New Zealand earthquake, is only as effective as the numbers of people using it — but it’s catching on quickly, with about 6,900 records as of 10:30 a.m. EST. Users can enter a name in English or Japanese and search for missing persons, or post updates about people who you know are safe. It also aggregates other disaster bulletin boards erected by Japanese companies.

Similarly, a local developer in Tokyo put up an Ushahidi crisis platform, which is collecting information about the locations of trapped people and unsafe buildings. People can find out where to find help or a pop-up hospital, according to GOOD. The platform was used to help relief workers in Haiti.

Though Japan is by far the hardest hit, 20 countries including the U.S., Canada, Russia, the Philippines and several Pacific island nations are under tsunami warnings. Hawaii’s Pacific Disaster Center is posting updated tsunami warnings and a map showing the dangers facing each of the state’s islands.

The Hawaii chapter of the Red Cross is using Twitter to post tsunami warnings and potential evacuation efforts.

And a United Nations satellite-monitoring group might also be activated, reports Fast Company.

The earthquake is among the top 10 largest ever recorded, according to U.S. Geological Survey seismologists. The devastation is still unfolding, with fires raging, widespread blackouts and a devastating tsunami. Workers at a nuclear plant in Fukushima prefecture are having trouble cooling off the reactor, and the area is being evacuated; hundreds of people are confirmed dead in the wake of the tsunami; waves of mud inundated farmland; and transportation has ground to a halt.

Meanwhile, disaster-relief agencies are starting to mobilize and accept donations. The Defense Department is readying American forces in the Pacific to help, AP reported.