Veteran Space Shuttle Discovery Touches Down For The Last Time

With NASA’s space shuttle program in full wind-down, it seems like there are a lot of “lasts” in America’s storied,... 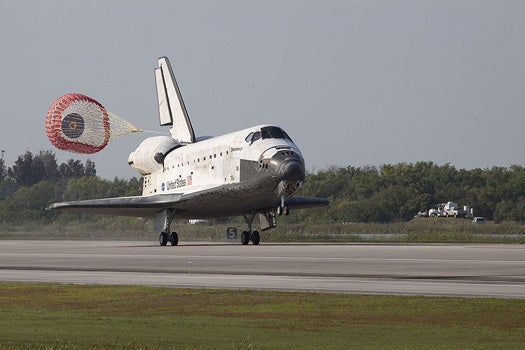 With NASA’s space shuttle program in full wind-down, it seems like there are a lot of “lasts” in America’s storied, three-decade Space Transportation System. Space shuttle Discovery successfully touched down at Kennedy Space Center in Florida just before noon today, marking the end of STS-133 and Discovery’s final mission, the 39th and last flight for the busiest spacecraft in NASA’s shuttle fleet.

A quick eulogy for Discovery: It has spent 365 days in space (that’s a full year in orbit), carried more crew members into space than any other shuttle, made more orbits than any other shuttle in the fleet, and docked with both Mir and the International Space Station (the latter multiple times, because Discovery built the ISS). Discovery launched the Hubble Space Telescope and the solar exploring Ulysses spacecraft.

Discovery was chosen for the the first return to flight missions after both the Challenger and Columbia disasters. And, with the two shuttles that preceded it to the launchpad lost to tragedy, it is now the fleet veteran. Appropriately, Discovery is the first of the remaining fleet to make its last journey to space.

But Endeavour isn’t far behind. The youngest space shuttle is scheduled to make its last journey to the launchpad at Kennedy Space Center tonight–just 8 hours after Discovery cleared the runway for the last time–setting the stage for its own final mission. In a rare occurrence, the crew of an incoming shuttle mission will more or less pass the crew of an outgoing mission on the tarmac.

Endeavour is scheduled for launch to the ISS on April 19. Atlantis’s final mission–and the space shuttle program’s last hurrah in space–is slated for late June.