Private EyeBot Lurks in the Shadows, Can Tail Suspects Without Being Seen

It was a day that started like any other: dark, rainy, and silent, except for the hum of my motors.... 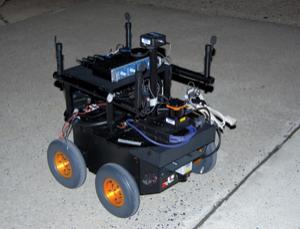 It was a day that started like any other: dark, rainy, and silent, except for the hum of my motors. I sat in my shadowy Robotown office, nursing some cheap electricity from the wall. It had been a slow month. A slow year. That was when the DameBot wheeled into my office. She was dressed in red metallic paint that fit her like a coat of paint, because it was, and her elegant treaded tires went all the way to the floor. You could tell she was used to getting what she wanted by the confident, single-speed way she made her way towards the corner of my office where I was plugged in, recharging with that sweet, intoxicating electricity habit I couldn’t seem to kick. “Private EyeBot, huh?” the DameBot bleeped and blooped. “I need you to follow someone without being seen–that is, if you can put down the plug.” “I need the plug, sister,” I said, “and for what you’ve got in mind, there’s no one better. Plug or no plug.”

The Private EyeBot, which doesn’t seem to actually go by that name, is a prototype from Lockheed Martin’s Advanced Technology Labs. It’s a small, four-wheeled robot that’s equipped with a variety of sensors to enable it to surveil without being seen. The most important of those sensors is a laser scanner, which maps the robots environment in 3-D. (We’re wondering why Lockheed didn’t just use a hacked Kinect sensor, which seems a perfect fit for the task.) It also has acoustic sensors to detect footsteps and the direction from which they’re coming.

The robot has four main goals: to avoid known and unknown sentries, avoid areas without an obvious escape route, and avoid well-lit areas in which it could be easily spotted. None of those four includes the ability to read a newspaper while leaning against a lamp post in a shadowy part of town, but as it’s a prototype, we’ll let that omission slide for now. Lockheed says they’re working on a more advanced artificial intelligence that would give the robot some sense of itself, to know its own shape and size and sounds, the impact of its movement on its environment, the possible lines of sight of any sentries, that kind of thing.

Surveillance robots and robots that can hide and perform other espionage-like actions are an emerging sector, and the U.S. Army seems pretty interested in what Lockheed and other robotics manufacturers can come up with. Let’s just hope they realize the need for punchy dialogue.