Messenger, meet Mercury. The first image ever obtained from a spacecraft in orbit around Mercury was snapped in the wee... 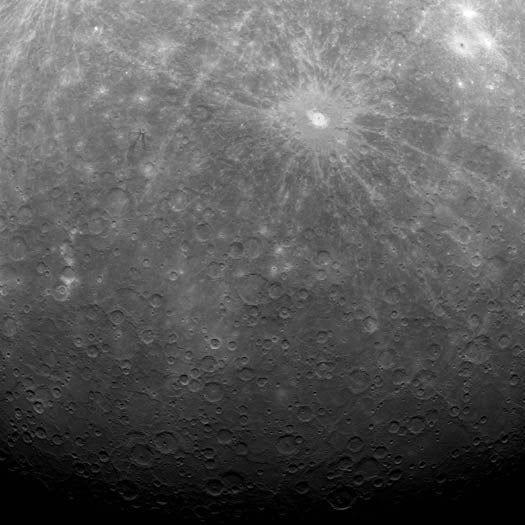 Messenger, meet Mercury. The first image ever obtained from a spacecraft in orbit around Mercury was snapped in the wee morning hours yesterday and returned to Earth in short order. Consider this shot the first trickle in a flood of data that’s about to begin pouring in from the innermost planet in our solar system.

This image shows a swath of Mercury’s southern hemisphere, an area that has never been thoroughly explored close-up (that prominent white feature is a huge, 50-mile-wide crater named Debussy). Though Mercury is the closest planet to the sun, it is thought water ice might be hiding in areas of permanent shadow here.

That’s just one question the Messenger spacecraft could help astronomers answer in the coming year as it makes multiple passes around the planet in its 12-hour orbit. The data stream coming back will be heavy; in the six hours after snapping the above image, Messenger collected 363 more. In the next three days, 1,185 pics will be beamed back to Earth, and that’s just to complete the commissioning phase for the on-board instruments.

The real science phase begins on April 4, when the mission plan calls for Messenger to begin a 75,000-photo survey of the planet (all counted, there are seven scientific instruments on board collecting various data). So this image is just a teaser, both in terms of the commissioning phase and the overall science mission. More photos of Mercury’s surface will be released later this afternoon.

Update: NASA and company have released a few more Messenger pics as promised, click through the gallery above to see what else Messenger is seeing. 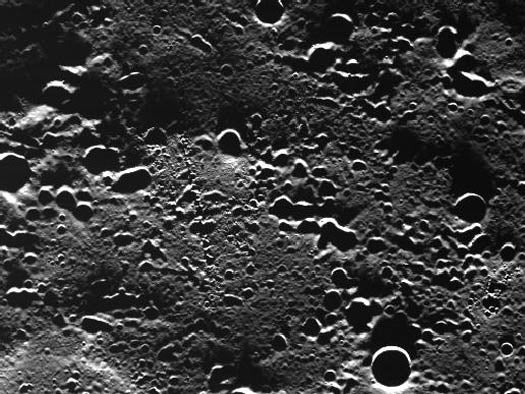 Messenger’s Wide Angle Camera imaged this never-before-seen patch of terrain near Mercury’s North Pole during its first pass over the region after the camera was activated. At this point Mercury is just 280 miles above the surface. The spacecraft’s elliptical orbit brings it as close as 125 miles from the surface and as far away as 9,300 miles. 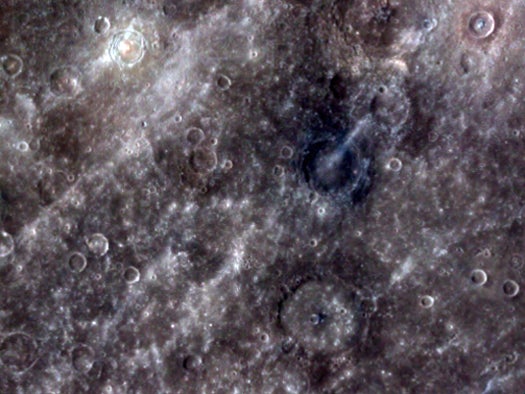 Messenger’s Wide-Angle Camera (WAC) can image in 11 colors in a range of wavelengths. A dozen filters (one for each color plus a clear one) are mounted on a wheel that rotates quickly so Messenger can image in every color on the fly. These variously colored images will help researchers on Earth determine the planet’s composition, as different minerals reflect and absorb light differently at different wavelengths. 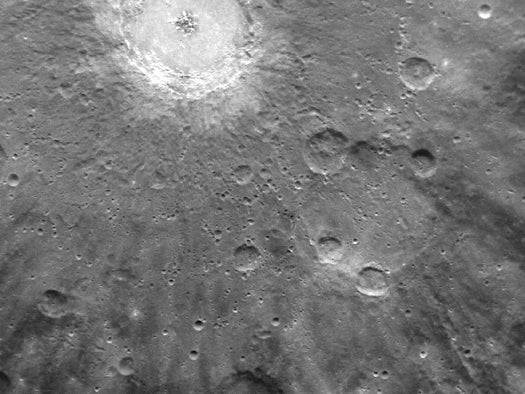 This closeup of the crater Debussy (named for the famous French composer Claude) shows a detail of the “rays” of ejecta and secondary craters that splay outward from the crater’s impact site. 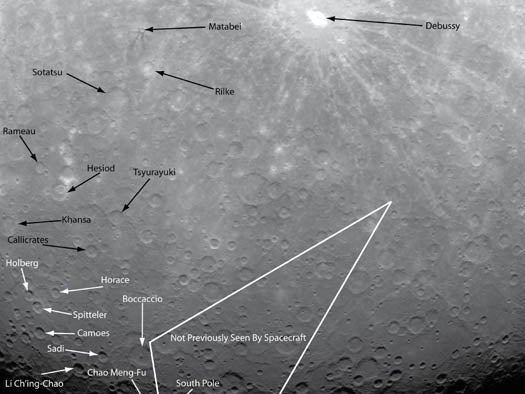 An Early Glimpse of Mercury, Annotated

NASA researchers were kind enough to annotate this duplicate of the first image captured by Messenger and released yesterday.
NASA
Solar System
Space