Like brunch plans dashed when it turns out someone in the party has lost his wallet, the ESA’s and NASA’s... 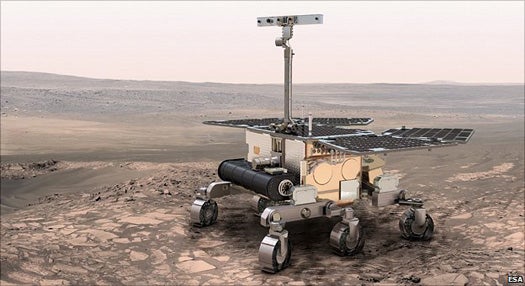 ExoMars is designed and ready to be built, but NASA's half of the joint mission lacks the funds to move forward (for now, anyhow). ESA
SHARE

Like brunch plans dashed when it turns out someone in the party has lost his wallet, the ESA’s and NASA’s best laid plans to take a trip to Mars together in 2018 could be ruined. A joint Mars exploration mission planned by both space agencies could be put on hold or even scrapped altogether because America can’t afford to pay its share of the tab.

This news comes via a new report from the U.S. National Research Council (officially titled “Vision and Voyages for Planetary Science in the Decade 2013-2022,” though many are referring to it as the “planetary decadal survey”) that says NASA is realistically about $1 billion short. The decadal survey is purely advisory at this point, but it does have weight; conducted by a group of independent scientists, it is viewed as a barometer of the larger space and planetary science community’s feelings and therefore is taken seriously by NASA policymakers.

The mission, as envisioned, calls for two rovers–one from each agency–to share a ride on the same rocket to Mars (because splitting gas money saves cash) where each will conduct missions on the surface. The European rover ExoMars would drill into the surface in search of life while its American counterpart Max-C would collect and package rocks for later retrieval and eventual return to Earth.

But the decadal report, relying on information from knowledgeable, independent parties, says Max-C would cost at least $3.5 billion to build and launch, a full $1 billion more than NASA can spare for the mission. The report doesn’t suggest NASA kill the mission but rather that it scale back to stay within budget. If that can’t be done, however, the report suggests deferring the mission until later or canceling it outright.

That’s too bad, considering an unrelated piece of news that also hit the wires today: planetary geologists think they’ve found evidence of water ice in the tropical regions of the red planet. Data gathered from the Mars Reconnaissance Orbiter and Mars Express missions show that distribution of carbon dioxide ice in the equatorial regions of Mars suggests the presence of water within several feet of the surface. Such findings, if confirmed, would have major implications for the feasibility of any future manned mission to Mars.

Luckily, we shouldn’t have to rely on ExoMars to drill down and find it. The Mars Science Laboratory mission slated to launch later this year is headed to middle latitudes that could harbor water, and one of its candidate landing zones is very near an area that the data suggests is water-rich.