Engineers in the UK have designed a new manufacturing process using powdered materials, using it to “grow” a weird ivory-colored... 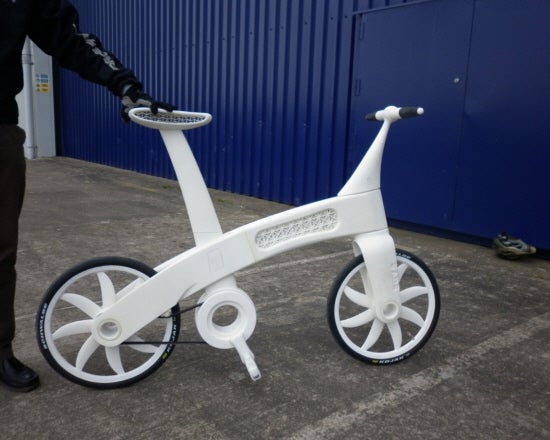 Engineers in the UK have designed a new manufacturing process using powdered materials, using it to “grow” a weird ivory-colored bicycle made of nylon. They say it is as strong as steel. The designers hope the growth process, a type of 3-D laser printing, could revolutionize manufacturing, according to the BBC.

The process is called Additive Layer Manufacturing, and it works somewhat like a 3-D printer. Guided by a computer-aided design program, a laser fuses together several layers of finely powdered metal, nylon or plastic. The laser melts the powder, which solidifies according to a chosen pattern. Then more powder is added, melting and solidifying to add layer upon layer until the object is fully formed.

The laser can draw any shape a designer might want, according to EADS, the European Aeronautic Defence and Space Company.

The process makes objects that are 65 percent lighter than traditionally machined objects, and uses about one-tenth the materials, according to Eureka Magazine. EADS, the parent of plane-maker Airbus, could use the process to make lighter airplanes.

EADS engineers wanted to demonstrate that the process could make just about anything, not just brackets and other unexciting materials, so they built a bike. Dubbed “Airbike,” it’s lightweight but strong, qualities you would want in an aircraft or a satellite. It actually consists of six separately printed pieces, including moving parts in the wheels.

Maybe someday it could be used to print out rockets that could carry passengers to printed space stations, where they could feast on printed retro space snacks.