The long-gestating Anybots telepresence robot finally started shipping this month, and now we can see it out and about in... 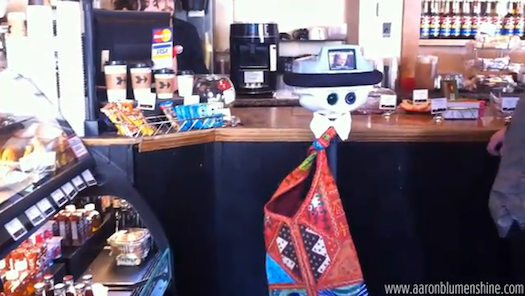 The long-gestating Anybots telepresence robot finally started shipping this month, and now we can see it out and about in the wild–“the wild” in this case referring to a coffeeshop in Palo Alto, California.

Anybots, which we previewed in a very different form more than a year ago, has evolved into a stick-thin telepresence system on wheels, looking something like an anemic Segway with a head. That head consists of two cameras (the “eyes”) and a fedora-looking top piece that houses a video screen. It enables the user to sit in presumably slouched comfort on a couch while using software to control the robot. The user can issue commands by simply speaking, as this user does while trying to secure some scones.

The robot itself isn’t really designed for shopping trips, as you can see by its lack of arms and ability to carry only very small loads (like, say, a breakfast pastry)–this one in particular is forced to use a hobo-like bindle. It also doesn’t have any kind of e-commerce system like NFC, which would allow it to forgo the awkward, ambiance-killing need to tuck cash (cash! What year is this?) in its helmet for payment. Still, this is a whole new world for incredibly lazy people as well as legitimate teleconferencers, especially now that it’s scone-compatible.