Using a small tank of water in a Colorado laboratory, Air Force researchers have captured 99 percent of the energy... 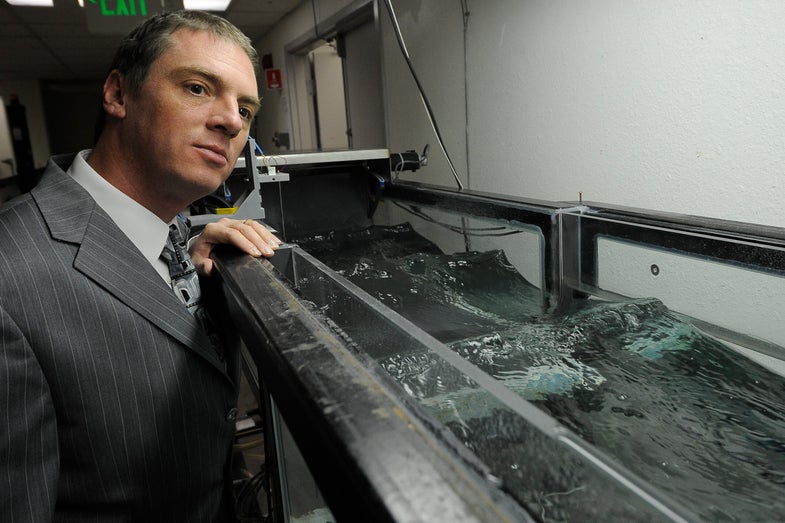 Using a small tank of water in a Colorado laboratory, Air Force researchers have captured 99 percent of the energy of a model ocean wave, proving it’s possible to use aeronautical principles to harness the power of the oceans.

The researchers used a cycloidal turbine, a lift-based energy converter, to grab the energy of a simulated deep-ocean wave. It can change direction almost instantly, and its structure is similar to that of a Voith Schneider propeller, which is used to power tugboats.

It involves a main power shaft and a few hydrofoils whose angle of attack can be adjusted to meet the wave. The main shaft is aligned parallel with the wave crests, according to a paper describing the system presented at an American Society of Mechanical Engineers conference.

The entire concept is not unlike a helicopter propulsion system, which involves shifting the angle of attack of the main rotor blades to move the helicopter sideways or to pitch forward and back. That explains why Air Force aeronautics researchers are involved — some of the people working on this project have studied fluid dynamics for military aircraft and NASA spacecraft, according to an Air Force news release.

The research is part of a National Science Foundation-funded project to build the world’s first free-floating submerged wave energy converter. In a series of experiments, the system was able to convert 95 percent of an incoming wave’s energy into mechanical energy, driving the shaft. The rest of the energy was lost to harmonic waves. But after some tweaks, the Air Force team, led by Dr. Stefan Siegel, was able to improve the energy conversion rate to 99 percent. The work was performed in a small tank, a 1:1300 scale version of the system’s size in the ocean.

The team’s grant runs through this September, but the results were so promising that the Department of Energy is providing $400,000 to build a bigger simulator tank at 1:10 scale. The next steps are to improve the converter’s survivability in severe weather, and to study methods for transferring energy to the grid.