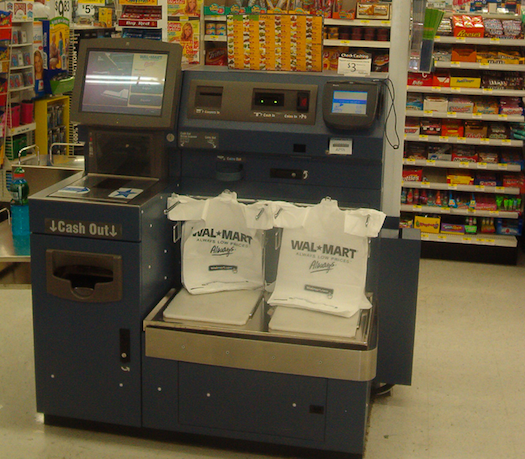 Self-checkout kiosks at the grocery store can save time and space for quick shoppers, but if an item doesn’t have a bar code–like, say, produce (hopefully)–you still have to search through the list of variations, which can lose any time you’ve gained by phasing out human interaction. But a new system from Toshiba uses a constantly-learning database and a webcam to identify individual types of produce. Where were you during apple season, Toshiba?

The system was developed by a team led by Susumu Kubota at Toshiba’s research center in Kawasaki, Japan. It relies on a webcam and a database of images, but only at first. Individual types of produce can be tricky to recognize for either human or webcam, involving subtle variation in size, shape, and color, as well as differences in perspective, so this system has the ability to learn. It’ll scan the item on the tray and then present a list of options, with the most likely at the top. Once the shopper selects the correct option, the machine will store that photo matchup and use it as reference for the future.

Tests showed that the software was even able to recognize produce trapped in a plastic bag, no mean feat. Kubota notes that recognizing objects like fruit is even harder than facial recognition, since the produce has less to distinguish it.

Kubota also seems particularly worried that shoppers will trick the software so as to pay for cheaper produce. Since it learns over time, if people choose, say, the cheap Red Delicious option instead of the premium Honeycrisp, they’ll save money, but the algorithm will be weakened and unable to recognize either variety. That’s a problem with any automated checkout system, however, and is usually solved by having a human to oversee a group of kiosks. Toshiba is hoping to get the automated system into stores within three years.