Stretchable Nanogenerators Could Use Lung Motion to Power Medical Implants 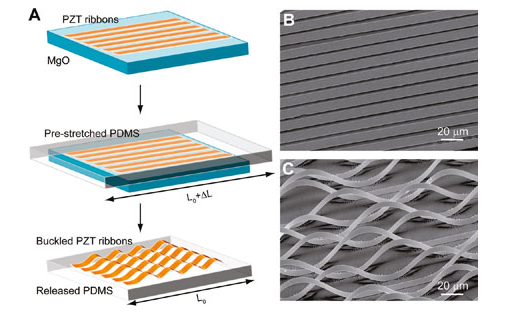 Future flexible lung belts could harness energy from the rhythm of your breathing, powering pacemakers or other implantable medical devices.

Nanotechnologists have found a way to integrate flexible piezoelectric materials with a stretchy silicone rubber, fashioning materials that can withstand lots of elastic strain while also harvesting energy from motion. Other piezoelectrics are not so elastic and can crack under pressure. Piezoelectrics, you’ll recall, turn kinetic energy into electrical energy.

To make the materials, researchers at Princeton University first made piezoelectric ribbons out of lead zirconate titanate, or PZT. Then they took a slab of silicone-based organic polymer and stretched it out. They added the PZT ribbons, binding the materials together, and then they let go. As the silicon substrate contracted, the PZT buckled, with part of it releasing from the silicone surface. The result was a wavy shape that lets the PZT stretch and contract without breaking.

The researchers found an added bonus — the strain imparted on the PZT actually led to an increased piezoelectric effect called the “flexoelectric effect,” according to lead researcher Michael McAlpine, in an interview with Nanowerk.

McAlpine believes the method could be used to create systems that harvest energy from continuous bodily functions, like breathing, to power implants like pacemakers. But before we can get lung-power implants, the researchers have to scale up the process to much larger systems.

The work, which was funded by DARPA and the National Science Foundation, is reported in the journal Nano Letters.