Merging art and industry, a performance art piece recently on display in London has at its center an unlikely star:... 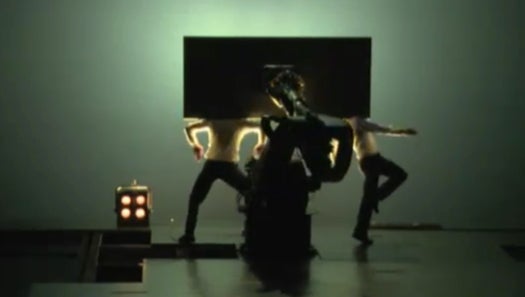 Merging art and industry, a performance art piece recently on display in London has at its center an unlikely star: an industrial robot whose former career was in automotive assembly. Conceived and directed by Aurelien Bory, the show is a meeting between man and machine, exploring the sometimes-blurry lines between the two as two human actors/acrobats interact with the powerful, massive robot arm.

The robotic arm joins other artistically-inclined robots at center stage, positioned quite literally in the middle of the performance platform (it’s controlled by an operator backstage). The act portrays the back-and-forth relationship between humans and their technology; at times the humans seem to control the stage, at other times the robot is clearly in charge, picking up the human acrobats and moving them around the stage. It joins a

The piece, which ran last month at the London International Mime Festival (yup, that’s real), required the stage manager to learn the old machine programming of the aging robot and a lot of debugging. The result is a ‘bot that’s sometimes purely mechanical, and sometimes surprisingly human after all. All that’s missing is a Daft Punk cameo.