Phytoplankton are essential for almost all life on Earth; the minuscule photosynthetic marine organisms anchor the oceans’ food chain while... 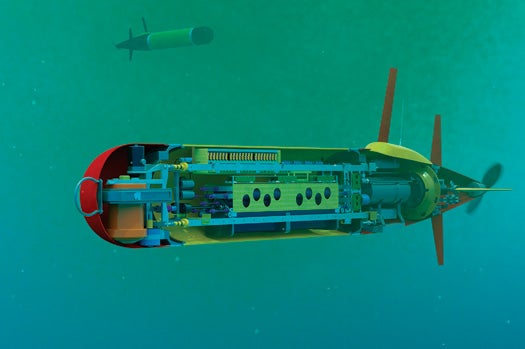 Phytoplankton are essential for almost all life on Earth; the minuscule photosynthetic marine organisms anchor the oceans’ food chain while also producing about half the oxygen on the planet. We know very little about them, though, in part because studying phytoplankton blooms as they drift across the sea is difficult. Manned research vessels are prohibitively expensive, and propeller-driven autonomous underwater vehicles (AUVs) typically run out of power after just a few days. Although low-power, glider-style AUVs can stay at sea for months, they can’t move fast enough to reach a phytoplankton bloom in its earliest stages.

A new AUV, Tethys, is a hybrid with the speed of a propeller sub and the endurance of a glider. Able to travel at two knots—fast enough to zip to a bloom after it’s been spotted by satellite—Tethys can power down and travel with the phytoplankton for weeks. Plus, its onboard computer makes navigational decisions without human assistance. Created by Jim Bellingham, the chief technologist at the Monterey Bay Aquarium Research Institute in California, the smart-subs will most likely work in teams, with each carrying different sensors and taking turns at power-intensive tasks such as roving the perimeter of a bloom or observing the zooplankton that feed on it.

Bellingham and his colleagues spent four years developing Tethys, which completed its first scientific mission last October, with several four-day jaunts tracking blooms in Monterey Bay. A second Tethys should be finished this month, and next year, the team expects to be able to swap out the subs’ rechargeable batteries for higher-power disposables and send them down the Pacific coast or across the ocean.

How The Subs Study Marine Life

After scientists spot a phytoplankton bloom by satellite, two Tethys AUVs, each about seven feet long, are launched from the shore. The AUVs conserve some energy by maintaining neutral buoyancy, pumping oil into or out of an expandable external bladder to change the robots’ density.

One Tethys uses its fluorescence sensors, which detect chlorophyll, to find and stay in the densest part of the bloom. It powers down to drift along with the plankton. To dive and climb, the sub slides its batteries forward or back within its body, taking measurements of the water’s nutrients and temperature.

The other Tethys uses its shifting battery and wings to explore the boundary of the bloom—even against the current—and map its 3-D shape. It breaches to communicate with scientists onshore via satellite and uses acoustics to relay commands to its drifting partner. When its batteries start running low, it switches roles with the other sub.

The AUVs could capture phytoplankton samples for later analysis and spend weeks tracking a bloom’s entire life cycle, while still having enough power to head for home.