Smaller, more efficient antenna tech could cut the cost of a network in half. 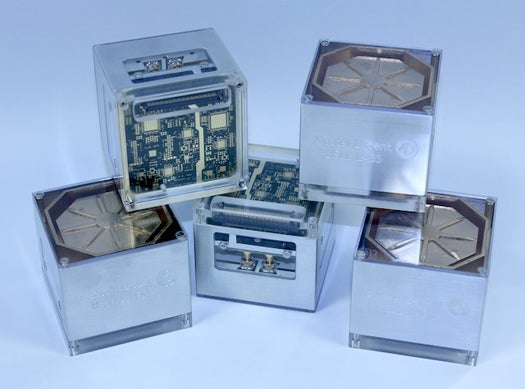 It took the cell phone several generations to shrink from those oft-mocked Motorola DynaTACs to the slender, pocketable smartphones we have today. But it seems the cell phone tower is poised to make the move from large to very, very small in just one leap. French mobile tech maker Alcatel-Lucent today unveiled a new technology that reduces cell tower base station components—usually housed in a file cabinet-sized casing—to a device the size of a Rubik’s cube.

The technology, known as lightRadio, chops existing cell tower technologies into pieces and redistributes them in a way that allows for smaller, more numerous towers that are less intrusive and that work with all frequencies and technologies currently used, from 2G up to the latest 4G/LTE signals.

To sum the tech up neatly, the radio components—radio, amplifier, diplexer, etc.—are shrunk into the cube itself. These cubes can be stacked or distributed on or near an antenna, with about 20 cubes necessary to replace the average 3G base station today. The processing components are separated from the radio components, meaning they can be mounted at the base as they were before or—more efficiently—in a centralized locale connected to the cell tower by fiber optic cable.

This arrangement creates a bevy of benefits for both carriers and users. For one, antennas can be smaller and put in more places, increasing signal and decreasing to obtrusiveness of huge antenna masts. The centralization of the data processing components mean that rather than assigning processing power to a certain antenna, it can be diverted from antennas experiencing low loads to antennas that need extra processing power, allegedly doubling the capacity available to any given user at any given time.

Futher—and this might be Alcatel-Lucents most ambitious claim—lightRadio can cut both the financial and energy costs of operating a network by more than half. This is accounted for by a reduction in the energy needed to run a given base station and the fact that base stations can be upgraded quickly and easily; those that need more broadcast power can simply have more cubes added to their arrays, and if one cube fails, the others will continue to function, reducing the impact of outages and simplifying maintenance.

That is, if all of the technology works. But we won’t have to wait long to find out. LightRadio is getting a public test-drive at the Mobile World Congress next week in Barcelona. Alcatel-Lucent plans to trial it later this year, with commercial deployment scheduled for 2011.