Engineers are always looking for ways to pare down the size of technologies, and apparently that penchant for miniaturization extends... 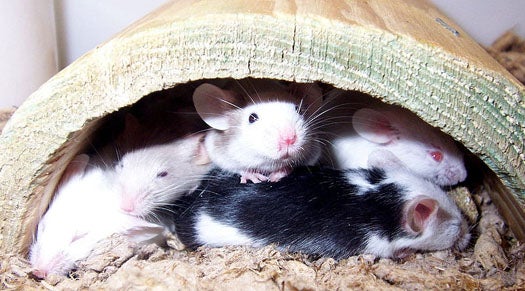 Engineers are always looking for ways to pare down the size of technologies, and apparently that penchant for miniaturization extends to bomb-sniffing canines as well. Israeli researchers are trading in their dogs for mice trained in explosive detection, using teams of tiny rodents to keep dangerous materials out of airports.

Researchers say the mice are more sensitive than dogs when it comes to nosing out explosive chemicals, and that tapping that sensitivity is more effective than X-rays and pat downs.

But the mice won’t be patrolling the airport on leashes like their canine counterparts. Rather, a team of mice will be housed in a casing about the sized of a full-body scanner, one side of which will contain three concealed cartridges, each containing eight mice. Working in four-hour shifts, the mice simply mill about, sniffing the air that is pumped in from outside.

The mice are trained to respond to the chemical traces of explosives in the air as a threat, prompting them to flee into a side chamber as if eluding a predator. Doing so triggers an alarm. More the one mouse must flee into the side chamber to sound the alarm, cutting down on false positives.

It may sound a bit strange, but these tiny security sentinels have a record that squeaks for itself. The device was tested last year in a Tel Aviv mall containing 1,000 shoppers, 22 of which were carrying mock explosives. The mice went 22 for 22.