Forget the gigantic Large Hadron Collider — how about a particle-accelerator-on-a-chip? OK, so it can’t reach the energies produced at... 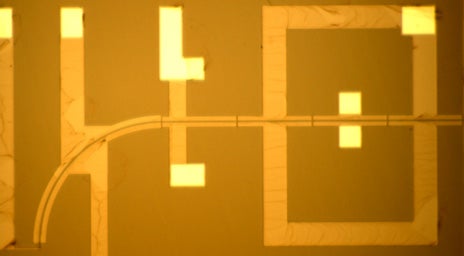 Forget the gigantic Large Hadron Collider — how about a particle-accelerator-on-a-chip?

OK, so it can’t reach the energies produced at the LHC or Tevatron, but this is still pretty impressive. Engineers at a micro-electro mechanical systems conference last week unveiled this tiny cyclotron device, which can speed argon ions down a 5-millimeter accelerator track.

The ions have 1.5 kiloelectron volts of energy and pick up another 30 electronvolts when they whiz around a 90-degree turn, as IEEE Spectrum explains. That is peanuts compared to the 3.5 teraelectron volts currently experienced at the LHC, but hey, this chip is several orders of magnitude smaller than that massive series of tubes.

Unlike most other accelerators, this device skips magnets and instead uses an electrical field to accelerate and steer its particles through a pair of electrodes.

The goal is a suitcase-sized accelerator capable of producing 1 MeV, which would make it powerful enough for a wide range of uses, according to the chip’s creators at Cornell University. Such a device could be used to make smaller scanning electron microscopes or portable ray guns to fight cancer, rather than installing particle accelerators inside hospitals, for instance: “Think of a scalpel with a proton beam coming out of it,” said Amit Lal, who worked with chip-builder Yue Shi and leads Cornell’s SonicMEMS Laboratory.

A few hurdles remain, including a more efficient way to grab ions from the 75-micrometer-wide beam. Lots of ions are lost in the transition, Shi said. But the device at least proves the concept that you don’t need humongous frozen magnets and cavernous spaces to speed up some particles.

DARPA is funding the work, which is ongoing at Cornell.