Atomtronics, Or Atoms Spun By Laser Beams, Could Replace Electronics

A new type of circuit involving a whirling donut of supercold gas could lead to the world’s first “atomtronic” devices,... 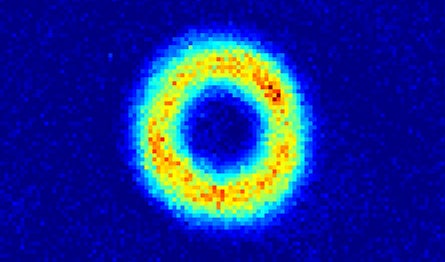 A new type of circuit involving a whirling donut of supercold gas could lead to the world’s first “atomtronic” devices, potentially more powerful than electronics or spintronics, researchers say.

It probably won’t be powering your next smart phone, however — it involves laser beams and supercold temperatures a few billionths of a degree above absolute zero.

Atomtronics involves super-cooling atoms to form Bose-Einstein condensates, which could theoretically be used to create analogues to electrons, diodes and transistors. The atoms in the condensate flow as a current, which can be switched on and off like a normal circuit.

Researchers at the Joint Quantum Institute in Maryland suspended sodium atoms in a magnetic field and cooled them down, then trapped them in a pair of crossed laser beams, as Science News explains. They further cooled the atoms to a few billionths of a degree above absolute zero, resulting in a Bose-Einstein condensate — the atoms began to act as one quantum particle. The researchers flattened it into a donut-shaped ring with a radius of about 20 micrometers, Science News says.

Another set of lasers zapped the ring to start it spinning. Because the condensate acts as one unit, it spins without friction, meaning it could theoretically spin forever. In this case, it only lasted about 40 seconds, the lifetime of the condensate. The researchers say the method could be used to build a new type of rotation sensor.

Atomtronics uses atoms in strange quantum states to power devices or computer memory. This is different from spintronics, which stores information based on the spin of individual electrons, allowing each one to store two bits of data instead of one. Computer scientists and particle physicists have made several advances in these fields in the past several months.

Last fall, a University of Utah team figured out how to store quantum data in the nuclei of phosphorus atoms, in a step toward creating quantum memory. In August, Ohio State researchers built and tested the first spintronic memory device.

Atomtronics is still a mostly theoretical field, as Science News points out.

The JQI research will be published in an upcoming issue of Physical Review Letters.