After Retiring from Government Service, Space Shuttles May Be Sold For Flights In Private Sector 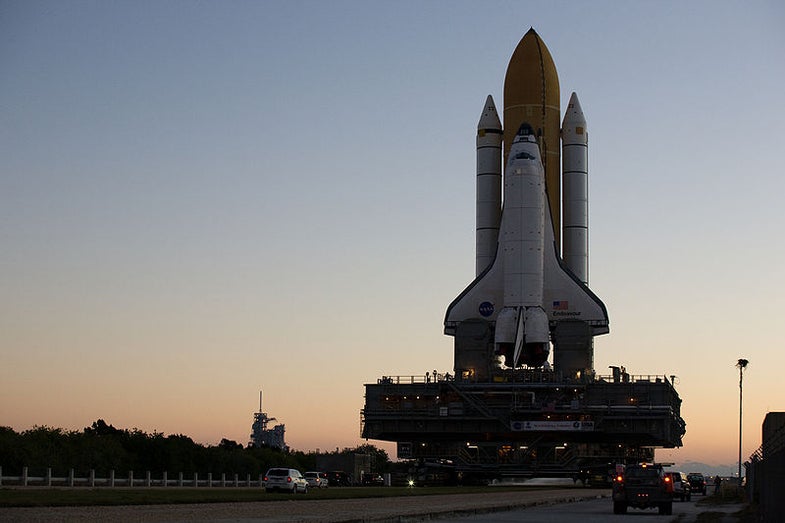 A NASA contractor wants to go all Brett Favre on America’s space shuttles, pulling them out of retirement past their prime to keep them going, even if it’s to play for the other side.

United Space Alliance, which manages the shuttle program for NASA, wants to spend $1.5 billion annually to fly two missions a year from 2013 to 2017, using Endeavour and Atlantis.

It would bridge the gap between the end of the shuttle program and the start of privately run space taxis, and help prevent American reliance on Russian Soyuz spacecraft.

The shuttles couldn’t emerge from retirement until 2013, however, after the construction of a new external tank. The last tank ever made is dedicated for Atlantis, which will be ready to fly a rescue mission during Endeavour’s April mission. If it’s not needed, Atlantis will close out the shuttle program with its final mission in June.

United Space Alliance broached the subject as part of NASA’s Commercial Crew Development Initiative, a program to encourage private shuttle replacements. NASA disbursed $50 million in stimulus funds to five companies as part of the initiative, and USA is the only one to suggest continuous shuttle use. NASA has $200 million for a second round of the initiative. Competitors include SpaceX and Orbital Sciences, which are already receiving NASA funds to develop cargo transportation systems.

Mark Nappi, head of USA’s Florida operations, told Florida Today it’s worth a shot to include the shuttle among other commerical options, because they have more than proven themselves: “It is safe. We have a lot of history, we understand how to operate it,” he said.

The company proposed a six-month study of the privatized-shuttle option, which is actually not a new concept — NASA has studied it going back at least a decade. Meanwhile, NASA is apparently looking at the costs of keeping Endeavour in flight-ready status at Kennedy Space Center after its final launch, MSNBC reported last week. Space shuttle Discovery has already been promised to the Smithsonian Institution’s National Air and Space Museum in Washington, D.C.

The $1.5 billion price tag is about the same cost as NASA’s cargo contract with SpaceX, which involves at least 12 trips to the International Space Station. It’s about half the cost ($3.1 billion) budgeted for the space shuttle program in 2010, according to USA Today.

The whole plan is a long shot, however. Nappi said he told his employees as much to avoid giving them false hope.