By linking together three massive radio telescopes in Europe, South Africa and Western Australia a University of Southampton professor is... 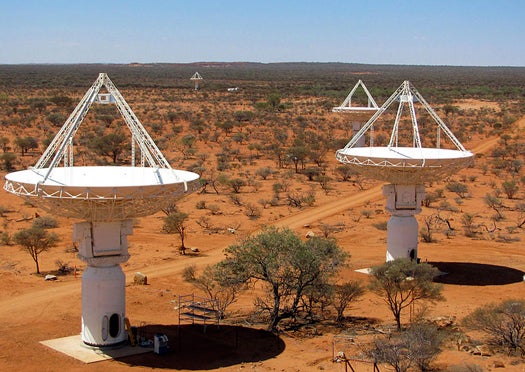 By linking together three massive radio telescopes in Europe, South Africa and Western Australia a University of Southampton professor is taking the lead in a global effort to capture astrophysical events across the entire sky for the first time.

High-energy events like colliding neutron stars or energetic black holes swallowing stars emit radio waves that can be detected here on Earth. Unfortunately, telescopes here usually only see a tiny fraction of these phenomena (not to mention the Earth is always turning, moving telescopes away from what they’re focusing on). The 4 Pi Sky projects aims to link three of the world’s best radio ‘scopes together, allowing researchers to move seamlessly from one array to the next as the Earth rotates, keeping the entire sky in view at all times.

The project – funded by the European Research Council – will tap LOFAR (the Low Frequency Array, which is scattered across Europe), MeerKAT in South Africa, and ASKAP in Australia. Southampton Physics and Astronomy Professor Rob Fender, leader of the program, thinks the whole-sky observatory will find thousands of high-energy events that otherwise would go unnoticed or poorly observed.

The project will also link up with the orbiting MAXI X-Ray telescope, which is orbiting aboard the ISS, making the venture not just a global collaboration, but one that spans into low earth orbit.