We’ve heard of satellite phones before, but never one quite like this: a UK firm plans to launch an Android-based... 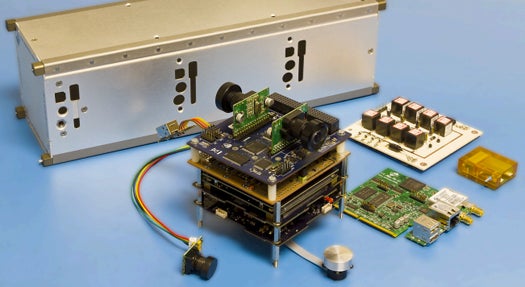 We’ve heard of satellite phones before, but never one quite like this: a UK firm plans to launch an Android-based smartphone into orbit later this year, using it to control a 30-centimenter long microsatellite and to snap images of the Earth with its built-in camera. The effort, led by a team at Surrey Satellite Technology Limited (SSTL) in Guildford, UK, wants to see just how well smartphones can function in the hostile environs of space.

Plenty of phones have journeyed to the upper atmosphere aboard high-altitude balloons and homemade rockets, but SSTL’s phone will be the first one we know of that will be put into orbit as part of the functioning hardware of a satellite. Engineers at SSTL want to explore the ways smartphones—which have become increasingly powerful computers in recent years—can be integrated into satellite systems and whether or not the phone can control a small satellite.

The mission, known as STRaND-1 (Surrey Training Research and Nanosatellite Demonstration, will integrate the whole phone into the satellite—that is, they won’t strip the insides out and repurpose them in some other way. In fact, while the phone’s own camera will be used to snap images of Earth, a second camera will be mounted inside the satellites housing to gather imagery of the phone’s screen as the team operates the phone remotely. The whole idea is that phones are already inexpensive technology packages containing various sensors and accelerometers, Wi-Fi and GPS receivers, and camera technologies.

Initially the phone (the specific model has not yet been disclosed) will act as a backup to the main computer on the satellite, but in time mission handlers want to phone to take over all functions of STRaND-1, including control of the guidance, navigation, and pulse plasma propulsion systems. The idea is to see how the phone’s open-source Android software can be modified to optimize the phone’s functions for spacecraft control.

If it works, ostensibly software designers could design all kinds of apps for future microsatellite missions. That would essentially turn Android into an open source platform not just for phone OS design but for satellite design as well, making space a far more open place.