Criminals tempted to return to the scene of the crime might find themselves rethinking that impulse if the Questionable Observer... 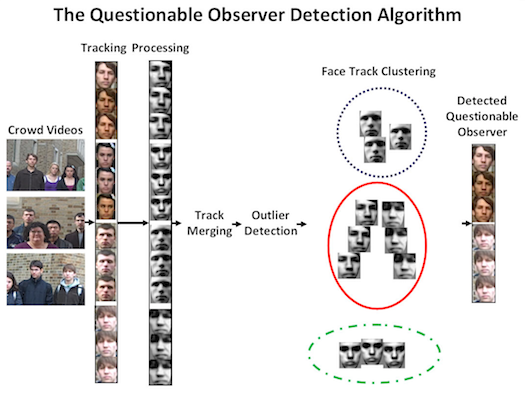 Criminals tempted to return to the scene of the crime might find themselves rethinking that impulse if the Questionable Observer Detector is embraced by police forces. The QuOD scans video of a crime scene, searching for those in all-too-frequent attendance, hoping that those repeat gawkers might in fact know something about the crime itself.

The QuOD, as it’s called, comes from the Department of Computer Science and Engineering at the University of Notre Dame, is essentially 3-D facial recognition software. It creates “face tracks,” some kind of recognizable pattern in a face, to pick individual people out of a crowd. The interesting part is that it works from any video stream, a big bonus in a world where our first impulse at seeing a crime is to whip out our smartphones and document it on video.

That means that the QuOD is useful for picking out those who show up at crime scenes repeatedly, but also at picking out faces in areas documented with multiple security cameras or personal video recordings. The software counts the number of times a particular face pops up, and if it’s more than a certain amount (set by the operating authorities), it’ll present that person as a possible person of interest–though it doesn’t seem to link to any database, like this FBI face detector does.

Luckily, that’s all it does–there’s no Minority Report-style motive assessment. It’s simply a shorthand for a formerly tedious and arduous task, that of scanning through footage to try to find any recognizable faces. The QuOD hasn’t as yet been picked up for use by any police force, but we could see it being a useful timesaver.