Sloan Digital Sky Survey Releases Most Detailed Sky Map Ever, With Over a Trillion Pixels

After more than a decade of scanning the skies with a 138-megapixel camera mounted on an 8-foot telescope, the Sloan... 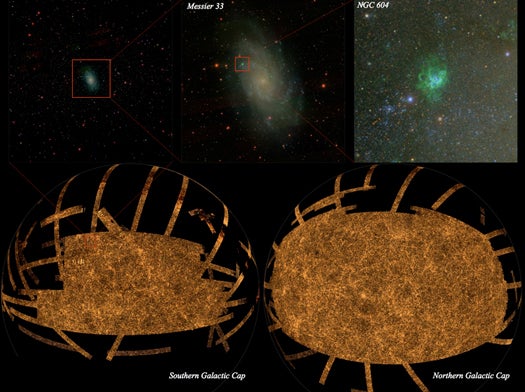 After more than a decade of scanning the skies with a 138-megapixel camera mounted on an 8-foot telescope, the Sloan Digital Sky Survey (SDSS) has delivered the largest and most detailed image of the sky ever – an image so detailed and large that it would take half a million high-definition televisions to take it all in at full resolution. And that’s just one-third of the sky.

The SDSS replaces images collected by the Palomar Sky Survey and other telescopes over past decades reaching all the way back to the 1950s, images still used by astronomers today though some of them are decades old. Microsoft’s Terapixel project recently stitched 3,400 images from the Palomar telescope (and others) to create a giant sky map, but the SDSS phase III images – gathered with more modern technology and techniques – contain 10 times as many cosmic objects as the Palomar survey.

Gathered at the Apache Point Observatory in New Mexico since 1998, the SDSS-III image is also a composite, stitched together to contain more than a trillion pixels, with each pixel containing five different colors of light. Researchers with the SDSS estimate that there are half a billion objects – galaxies, nebulae, stars, and the like – that scientists will be able to study in unprecedented detail for decades to come.

The map only covers about a third of the total sky (this is why you see parts of the map above that extend into space but aren’t filled in on all sides), divided into the northern and southern hemispheres of our galaxy (as seen in the bottom two panes in the image above). At this scale you can see huge clusters and walls of galaxies, but you have to zoom way in to see individual subjects. The top left shows the spiral galaxy Messier 33, some two million light years away. The top right is an even closer zoom of one of the star birthing regions in Messier 33.

The real value in SDSS-III isn’t just the fine detailing of objects elsewhere in the universe, but the logging of the full light spectra of objects – an added layer measurement that allows scientists to measure distance to the various objects out there. This in turn was used to infer a 3-D map of their distribution and will allow them to study the expansion of the universe – and the dark matter some think are driving that expansion.