A new long-range laser weapon takes a page from Greek antiquity to thwart marauding pirates at sea. It won’t set... 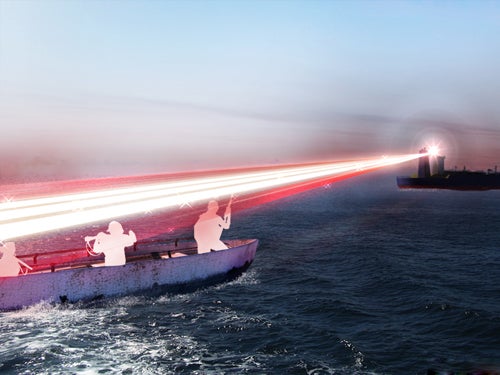 A new long-range laser weapon takes a page from Greek antiquity to thwart marauding pirates at sea. It won’t set their ships on fire, but it can let pirates know they have been spotted and might make them wish for an eye patch, as New Scientist reports.

British defense giant BAE Systems is testing a new green-light laser, which can automatically modulate its intensity depending on the weather and distance to target. Piracy has been on the rise, according to the International Maritime Bureau — there were 430 pirate attacks last year, including an audacious attack on a U.S. warship in the Indian Ocean.

Most pirate ships tend to be small 20-foot skiffs, explains BAE’s Bryan Hore, so the 3-foot-wide beam was designed to target an entire pirate vessel and its crew.

From nearly a mile away, it’s bright enough to simulate accidentally looking at the sun, according to New Scientist. Sunglasses would only make it worse, because they would make the laser appear even brighter against the darkened background. It wouldn’t cause any lasting harm, but the bright light would be distracting and could make it harder for pirates to aim their AK-47s, Hore said. 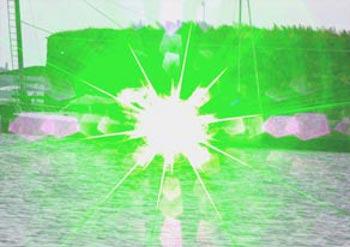 During the siege of Syracuse 2,200 years ago, the Greek physicist Archimedes purportedly used a network of mirrors to focus sunlight into heat rays and set invading ships on fire. The historical myth has been sufficiently busted (with help from President Obama), and now some historians think the heat ray was used to baffle the marauders instead of setting them ablaze.

BAE has tested its laser from ranges up to three-quarters of a mile. If it obtains enough funding, the laser could be ready for sale in about a year.