Dogs are smart, and they possess both instinctual and physical abilities to recognize and negotiate obstacles that in many cases... 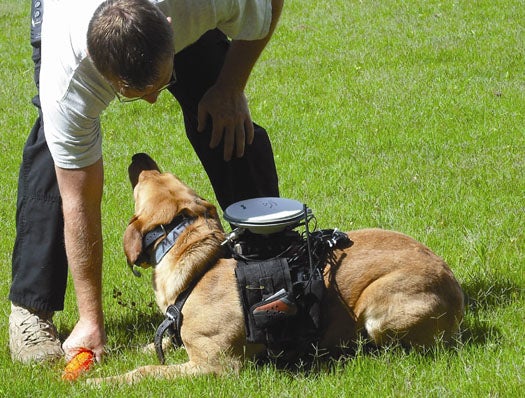 Dogs are smart, and they possess both instinctual and physical abilities to recognize and negotiate obstacles that in many cases surpass the abilities of humans. They are also easily distracted and not always the best at evaluating a situation and making decisions based on shifting circumstances. So researchers at Auburn University have created a new system that lets handlers to guide dogs remotely through a software system that translates commands into auditory and tactile stimuli.

A specially-designed harness fitted with GPS sensors, a CPU, and a wireless modem connects with a base computer that human handlers can use to keep track of the canine and issue commands. The harness vibrates on the left and right sides and issues tones that the dog recognizes as commands, allowing the handler to guide the dog remotely.

But the dog isn’t the only element of the system that requires training. The software behind the system is trained in the canine’s thought processes as well, taking the animal’s natural inclinations into account. In this way, the system isn’t just a means for handlers to issue hard commands; the handler can determine an objective or a destination for the dog, but the software takes into account the dog’s innate capabilities and sensibilities to help it get to its destination accurately.

The system has myriad law enforcement, first responder, and military applications (no word yet on what the tactical version might look like) because it allows handlers to maintain remote contact with their animals without maintaining a line of sight, allowing the dogs to operate in areas deemed to dangerous for humans. But by computerizing the communications between animal and handler, the system will also generate a lot of data about the animals themselves and the way the respond to certain tasks and commands. That in turn should help both handlers and the software improve the ways they communicate with canines.