NASA’s next-gen robotic lander is moving right along, having already completed tests on a first prototype. Now the Robotic Lunar... 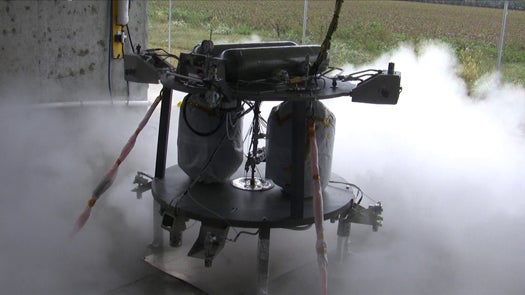 NASA’s next-gen robotic lander is moving right along, having already completed tests on a first prototype. Now the Robotic Lunar Lander Development Project at Marshall Space Flight Center has received its latest test toy: a sophisticated new propulsion system that will be integrated into an autonomous lander prototype capable of landing softly in airless environments where parachutes and airbrakes won’t do the job.

The new propulsion system consists of a series of jets carefully arrayed to achieve the right balance of thrust and control – a total lf 12 attitude control thrusters, three primary thrusters to slow the vehicle’s descent, and one large “gravity canceling” thruster that eliminates part of the system’s weight to simulate a more lunar-like environment.

The system runs on a green hydrogen peroxide propellant that leaves behind only water and oxygen, a solution not too far from the hydrogen peroxide in the common medicine cabinet. Project handlers have already carried out a firing test on all the thrusters, firing them in series based on a simulated flight scenario.

Next step: integration of the thrusters into a real prototype, complete avionics, for real landing tests. From the finished product NASA hopes to create a framework for creating a range of tailored robotic research landers capable of touching down on the moon, asteroids, or in other airless space environments. NASA sees it as a way to field a variety of scientific missions via a standardized lander system, giving mission planners an off-the-shelf means to reliably land science instruments in a variety of interesting places.

Besides, how else are we going to deliver a nuclear warhead to the center of an incoming asteroid? 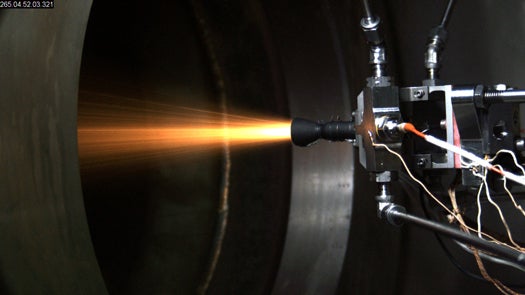