Now, to scrape together the money 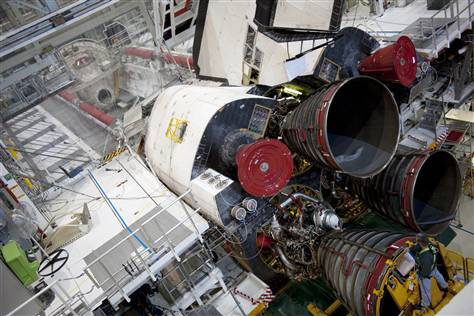 After months of delays and unusual personnel issues, NASA finally has a launch date for the last space shuttle mission. Just one snag remains: there’s no money to pay for it.

Discovery is set to launch Feb. 24 on a resupply mission to the International Space Station, and Endeavour will make its last voyage in April. Meanwhile, Atlantis will be waiting on the launch pad to fly to the rescue if anything goes wrong. If Endeavour’s mission goes without a hitch, then NASA wants to squeeze in one last mission for Atlantis. On Thursday, mission managers set a tentative date of June 28.

Last week, Sen. Bill Nelson, a Florida Democrat and former astronaut, said the third mission may not happen if Discovery’s tank has further problems. The shuttle was supposed to launch last fall, but the mission was delayed when NASA noticed cracks on two 21-foot-long, U-shaped brackets called stringers, which are composite aluminum ribs on the shuttle’s external fuel tank. There are no spares — the last tank was manufactured for Atlantis’ final launch. Nelson suggested to Space.com that if Discovery’s tank could not be fixed, NASA could take Atlantis’ tank instead and scrap the final mission.

Now that appears to be worked out, as NASA announced this morning that engineers had completed modifications on 61 of 94 stringers. The mission is a go for Feb. 24, and astronauts are scheduled to meet with mission managers and visit the shuttle today.

Meanwhile, their crew changed slightly when astronaut Tim Kopra was replaced after he was hurt in a bike accident near his Houston home. Veteran spacewalker Stephen Bowen will fly in his place.

Endeavour’s mission is also seeing some crew changes, as NASA named a backup commander for Mark Kelly, husband of congresswoman Gabrielle Giffords. Kelly remains the mission commander, and he said he hopes to fly in April, but he has been at his wife’s side in Arizona since she was shot Jan. 8.

Amid all this drama, NASA doesn’t have the money to pay for Atlantis’ last mission. The agency’s budget directs NASA to conduct the mission, but Congress didn’t earmark the $100 million in required funding for it. Using funds from the shuttle program’s regular budget, NASA is starting on baseline preparations, because if it waits for funding, it may take too long to get the shuttle ready. NASA administrator Michael Curie told the AP that Congress is expected to appropriate the funds in March.