Waterskiing is so passé. This summer, you’ll be able to fly with Raymond Li’s water-powered jetpack, which is going on... 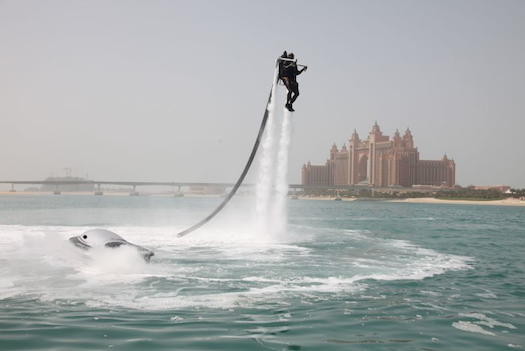 Waterskiing is so passé. This summer, you’ll be able to fly with Raymond Li’s water-powered jetpack, which is going on sale in March. It’s only $99,500!

The JetLev jetpack consists of a lightweight fiberglass backpack connected to a hose that sucks up water. By separating the engine and its fuel from the backpack, Li was able to drastically reduce the backpack’s weight and therefore the amount of thrust needed to get airborne. The device’s thrust-to-weight ratio is three times better than that of a fighter jet, according to New Scientist.

The jetpack produces 430 pounds of thrust, letting its pilot fly forward at 22 mph and reach heights up to 30 feet. “It’s the same reaction force a firefighter experiences when he points a water jet at a fire,” says Li.

But it’s much more easily controlled — the pilot can use hand controls to adjust the water pressure to make precise movements.

The jetpack was on display this week at a boat show in Germany, and it will be available for purchase starting in March, with a $99,500 price tag. New Scientist says initial sales will likely come from resorts and rental agencies. But it could prove useful for water rescues, marine inspections and even peackeeping missions, Li says.