Hubble Zooms in on Hanny’s Voorwerp, a Mysteriously Glowing Cloud of Gas 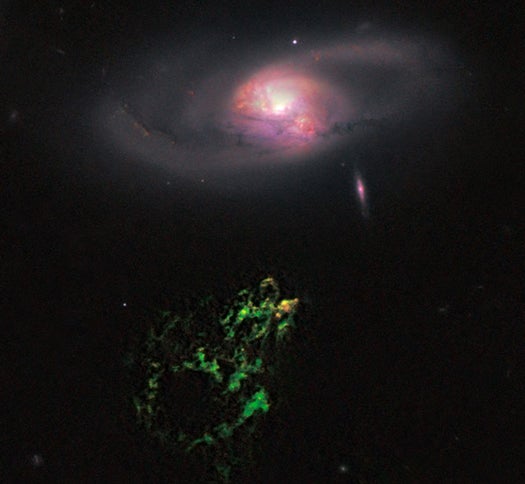 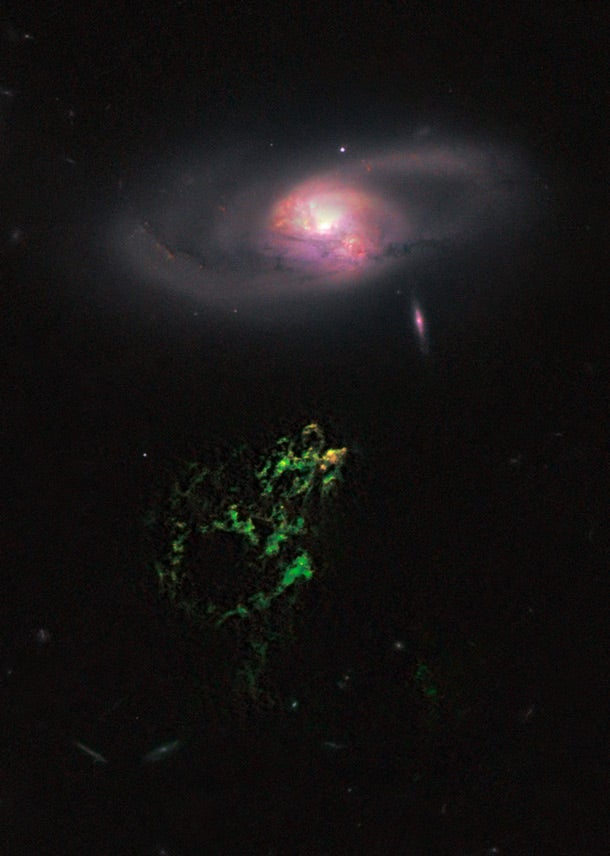 It sounds like something out of one of Douglas Adams’ Hitchhiker’s novels: a giant green cloud of gas known as Hanny’s Voorwerp that, by all appearances, is about to devour a nearby galaxy. So what is it? Well, astronomers aren’t exactly sure, but they have a pretty good idea, and this image – the most detailed to date, courtesy of Hubble – is helping them shed more light on the strange cosmic feature.

But let’s back up: Voorwerp is not a word borne of an alien tongue, but means “thing” or “object” in Dutch. And who is Hanny? She’s the Dutch schoolteacher and non-astronomer who discovered the Voorwerp lurking outside of galaxy IC 2497 via Galaxy Zoo, an online project where amateur stargazers can help classify galaxies by their shapes. Hanny van Arkel took an interest in the smear of green she spotted hovering near IC 2497, which in turn sparked astronomers’ interests as well, though they couldn’t explain it at the time.

Now Hubble is on the case, giving astronomers an enhanced view of her Voorwerp (not that Voorwerp, pervert), and the thinking now goes as follows: The green wispy structure is a giant cloud of gas, but that wasn’t the difficult part to hammer down. What puzzled astronomers was the source of light that makes the cloud glow. One idea involved a quasar in the nearby galaxy supplying the gas with light, but no quasar could be found. No other light souces was readily apparent, either.

So now the theory has shifted to that of a supermassive black hole in the center of IC 2497 that swallowed material for eons, leading to the creation of a huge energy jet that then blasted outward and connected with the nearby gas, lighting it up. Then, at some point many tens of thousands (or even hundreds of thousands) of years ago, the black hole ran out of material to swallow, or perhaps it shifted the way it gives off energy.

Whatever the case, it is no longer bombarding the gas cloud with energy – hence, no apparent light source. The Voorwerp continues to glow because it takes thin gas like the kind found there a long time to stop glowing. Eventually, starved of some kind of energy, Hanny’s Voorwerp will voorwerp no more.