Video: Evolutionary Robots Learn to Crawl Before They Walk

And they're stronger as a result. Just like babies! 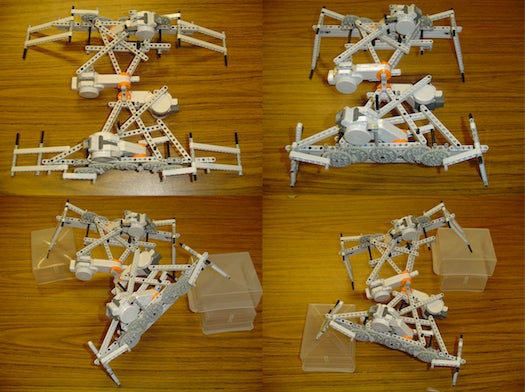 At the University of Vermont, roboticist Josh Bongard decided to take a page from organic evolution’s book in the course of his research. Humans and amphibians, among others, move through stages before they move as they will in adulthood, whether it’s a baby crawling or a tadpole swimming–why not a robot? Bongard’s ‘bots learn to crawl, then stagger, then walk upright–and are more efficient as a result.

Bongard built a genetic algorithm and put his virtual robot brains through five thousand simulations. That algorithm causes the virtual robot (represented in a three-dimensional space as a four-legged creature with a jointed spine) to experiment with different forms of movement, with the eventual aim of getting to a light without falling over. Mostly, the robots try three different forms of movement: crawling (like a snake or tadpole), skulking with splayed legs (like a lizard), or walking upright (like a four-legged mammal).

But the aim was to study the robots that move through those forms of motion, evolving from snake-like writhing to dog-like walking. Bongard says “the snake and reptilian robots are, in essence, training wheels,” allowing the robots to find motion patterns with a minimum of risk. After they’ve got the hang of forward momentum, figuring out balance to walk upright is no sweat.

As it turns out, those robots that began as crawlers and moved through the other stages of movement ended up much more steady and efficient than those thrust into upright walking from the beginning. That evolution prepared the robots for challenges even beyond merely walking–they responded much more effectively to impediments like, um, being poked with a stick (seriously). The evolved ‘bots were able to remain upright while their non-evolved siblings toppled over.

Eventually, Bongard built a simple model out of a few Lego Mindstorms kits to test his findings in the real world. You can see in the video above that the robots learn to crawl, then scuttle, then walk, just as in the simulations. It might be a simple proof of concept, but it is incredibly promising: Aside from all the end-of-days terror that an adaptable robot naturally invites, that sort of mind would also have incredible uses in fields ranging from medicine to the military to construction.