With the Dow Piano, You Can Listen to the Tune of the Stock Market

Good news: The song gets better toward the end 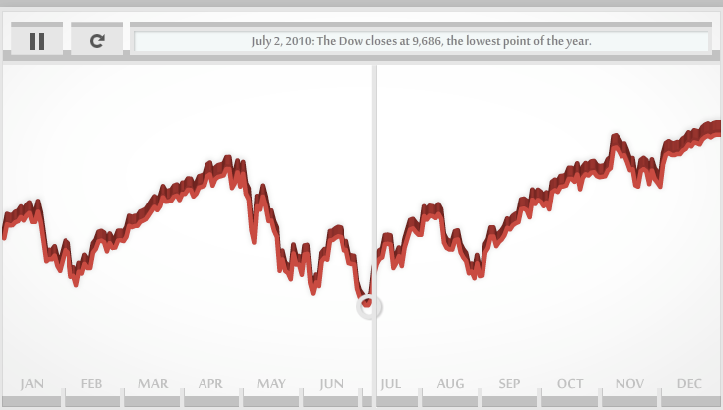 2010 was another rough year for the economy, as unemployment held steady, the housing market remained weak and the stock market followed a bumpy road. Now you can hear it set to music.

This is the Dow piano, a translation of the Dow Jones industrial average into a five-note scale spanning three octaves. CNN Money built the piano to illustrate the market’s highs and lows during the year that was. Click here to play it.

Each day’s closing level determines the pitch played, and trading volume determines how loudly a note is played. High trading volume — especially on May 6, the day of the algorithm-driven “Flash Crash” — leads to higher musical volume; holidays equate to softer tones. The notes are in clusters of five, representing Monday through Friday, CNN explains.

The Dow greeted 2011 with open arms, rising more than 5 percent in December — almost half the entire year’s growth in just one month. On Dec. 30, the Dow approached levels not seen since August 2008, before the market collapsed. As the piano plays through the last month, you can hear the anticipation.