Not to be confused with Bespin, the Cloud City 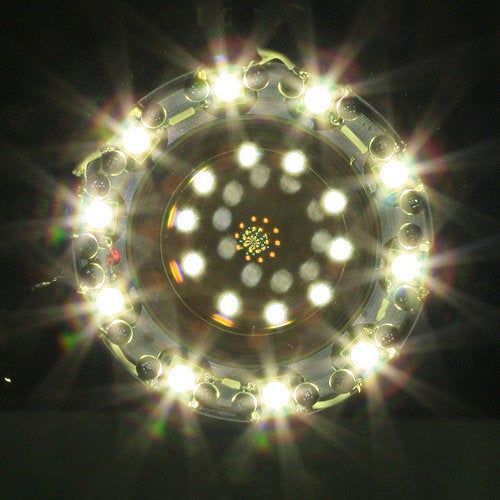 Last year, we wrote about a particularly bright scheme for using a room’s lighting to also transmit data, creating a wireless Internet connection that relies on visual light rather than radio spectrum. It seems the city of St. Cloud, Minn., thinks there’s something to the notion too. On Wednesday, hometown startup LVX Systems will begin installing light fixtures that transmit data via flickering LEDs.

Six municipal buildings in St. Cloud will receive the fixtures, which broadcast 1s and 0s by flickering at rates far faster than the human eye can detect. Clusters of LEDs in these overhead fixtures will communicate with special modems attached to the computers below, allowing fixture and computer to communicate with each other at rates of about 3 megabits per second, or roughly equivalent to a residential DSL line.

At those speeds, LVX’s light-based network won’t be replacing Wi-Fi anytime soon, especially given that handheld devices and computers are already tooled to work with Wi-Fi rather than light. But for St. Cloud, the data transmitting fixtures are more or less a bonus; they’ve chosen to install LVX’s LED fixtures to save money on lighting costs.

But a second-gen system that is expected to roll out in about a year will allow for speeds comparable with Wi-Fi, and if that proves successful its not difficult to see a future where some devices – especially those like desktop computers that are going to be used primarily in one place – are equipped with both optical and radio receivers and transmitters. Such designs could take advantage of light-based transmission when applicable and fall back on Wi-Fi only when necessary, thus easing the growing burden on the radio spectrum, which is growing increasingly crowded.

That’s not even accounting for the energy and cost savings that LED fixtures enjoy over traditional fluorescent lighting. If the savings alone are enough to make the switch worthwhile for large enough concerns (reportedly the Minneapolis-St. Paul International airport is thinking of adopting LVX’s technology as well), then that added connectivity is another incentive to make an energy-saving switch to LEDs.