Hungry? Better turn on your linear induction motor and send a metal capsule through an underground polyethylene tube to retrieve... 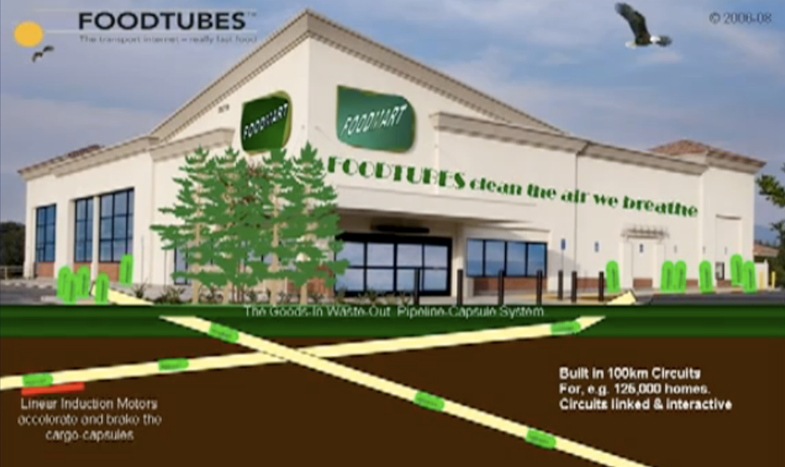 Hungry? Better turn on your linear induction motor and send a metal capsule through an underground polyethylene tube to retrieve some groceries.

That’s the vision of Foodtubes, a UK program that seeks to reduce carbon emissions by building a pipeline-capsule system to deliver food and freight. A series of tubes could ferry 6-foot-long metal bins among neighborhoods, entire cities or even to different countries, moving goods at 60 mph using linear induction motors and intelligent routing software.

Foodtubes says it’s “really fast food,” brought to you by the Internet of Things.

“In the long term, we could see an ostrich slaughtered in Cape Town, and delivered to Edinburgh,” said Noel Hodson, Foodtubes’ CEO, in an interview in EWeek Europe.

The group wants to start in the London suburb of Croydon with a $625 million pilot network connecting all the borough’s food shops, schools and buildings. Such a network would remove diesel trucks from the road, cutting carbon dioxide emissions by 8 percent a year and reducing congestion, the project’s leaders say.

It sounds crazy, but Foodtubes points out that other commodities — oil, water, gas and even sewage — have dedicated pipeline networks, and new 3-foot-diameter tubes are installed all the time. Dedicated Foodtube pipelines would require little maintenance and could earn $125 million a year, Hodson said.

Apparently the group initially considered vacuum tubes, like the kind you use at a drive-through bank teller, but realized it would be impractical on a massive scale. Instead, capsules would be accelerated with linear induction motors, which would be controlled by computers.

Two oil firms are apparently interested, EWeek Europe reports — the very companies that could stand to lose if diesel trucks are removed from the road. Foodtubes is talking to two firms about providing a pipeline in Canada’s permafrost and in the Middle Eastern desert, Hodson said.